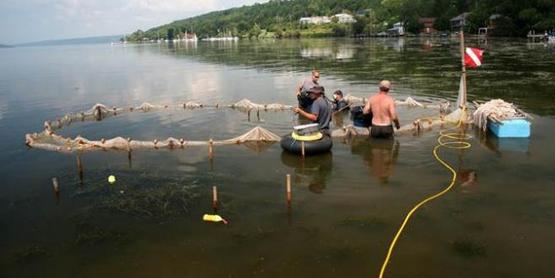 The use of benthic barriers in Cayuga Lake. Photo by Bob Johnson

On August 21, 2013, while conducting extensive surveys in the southern end of Cayuga Lake, survey crews from Racine-Johnson Aquatic Ecologists discovered two small patches of growing hydrilla in the south east corner of Cayuga Lake. The first patch in the south east corner was found off shore from the Visitors Center in about 30 inches of water. The second patch, consisting of two smaller patches that came from a single plant, was found further to the north, and was discovered during subsequent sampling. The larger of the two patches was estimated to be 12 feet by 45 feet (540 sq. ft). The growth found in the lake is much less dense than the hydrilla found in the Cayuga Inlet in August 2011. The survey crew found the patches of hydrilla while conducting an extensive rake-toss survey after hydrilla was found in Fall Creek on August 9.

The Hydrilla Task Force removed all the plant mass above the sediment in each patch by hand. Fine mesh barriers were installed to cordon off each patch. Divers, working inside the barriers and on the lake bottom, surrounded the plant mass and carefully lifted it by hand. Any fragments that broke off were caught by the barriers and collected. Sandy bottoms in this portion of the lake, coupled with warm water temperatures, allowed divers to work slowly and without gloves, minimizing sediment disturbance. After the plant mass was removed, the sediment was sampled for tubers. Benthic barriers were set in place atop each of the patches until next growing season. Hand harvesting of the Cayuga Lake patches was completed by August 30 th. As part of the existing eradication plan, ongoing plant monitoring in the lake will continue into December.

Even though these newly discovered patches of hydrilla along the lake shore and in Fall Creek were a setback, we continue to believe that eradication is possible. We remain optimistic because we have caught these new populations very early, when growth was still sparse. This is exactly why ongoing plant monitoring/sampling is included in the eradication plan. As a direct result of our ongoing monitoring efforts and early detection, we now have an opportunity to address and eliminate this problem before it has a chance to spread. This also lends support and justification for monitoring and sampling for hydrilla and other invasive species on a broader scale. A statewide initiative of invasive species monitoring will greatly increase the rate of early detection, leading to greater rapid response if/when additional invasive infestations are discovered. It is imperative that monitoring and sampling efforts for invasive species be conducted on wide-ranging scale, now more than ever.

Along with the immediate response outlined above, the Task Force is considered all possible responses for future treatments. We continue to consult with our state and national hydrilla experts who guide our present eradication efforts in the Cayuga Lake Watershed. Both the Task Force and our national advisors stress that we push forward with all facets of the eradication plan – herbicide treatments, monitoring and sampling, and outreach.