There has been a tremendous effort to prevent hydrilla in the Cayuga Inlet from spreading. Few states have developed rapid response programs to eradicate this sort of aggressive invasive plant.

Due to the expanding issues involving invasive plants, animals, and insects, many state laws and agency procedures must change in order to meet the end goal of eradication. The hydrilla task force is trying to achieve rapid response to the hydrilla invasion without currently possessing enough supporting legal or policy infrastructure. Many people, including local, state, and federal officials, are working very diligently to stop hydrilla from spreading and to build the networks, laws, and policies necessary for combating future problems with invasive species.

The Department of Environmental Conservation has begun enforcing a new law in the summer of 2016. The purpose of this regulation is to prevent the spread of aquatic species on a watercraft or floating dock that is moved from one body of water to another. The law states that no watercraft may be put into the water from a public launch without a cleaning inspection that ensures the removal of all visible plant and animal matter in, on, or attached to the watercraft. If such material is found, it must be disposed of in the proper receptacle. The water craft must also be completely drained of water.

The watercraft can be treated with one of three methods: drying, rinsing or painting. Drying can be performed by removing the boat cover and air drying for five days, storing in a subfreezing zone for three days, or towel dry the part of the watercraft that has been exposed to the body of water. Rinsing method involved spraying the external areas and flushing the water holding compartments with high pressure hot water for thirty seconds. The painting method must be used only prior to launching into the marine or coastal district water; the application and maintenance of an anti-fouling paint must include the watercraft’s hull or floating dock along with any associated trailer or equipment.

For more information, please go to the DEC page or our Boaters and Marina Owners page.

New York State Senate: Legislative Approval June 20, 2014: Requires DEC to develop regulations for boaters to take precautionary measures against the spread of invasive species. Measures include removing visible plants or animals and drying both motorized and non-motorized watercraft.The legislation was signed into law by Governor Cuomo on September 2, 2014.

New York State Regulations: EFFECTIVE JUNE 5, 2014: Boaters are required to remove all visible plant and animal materials from boats, trailers and associated equipment, and to drain boats prior to launching from DEC lands to reduce the spread of invasive aquatic organisms. The regulation covers DEC boat launches, fishing access sites and other DEC lands where watercraft such as boats, kayak or canoes can be launched into the water. Boaters should follow clean boating practices to ensure that boats, trailers and equipment are free of aquatic invasive species and disposed of properly. 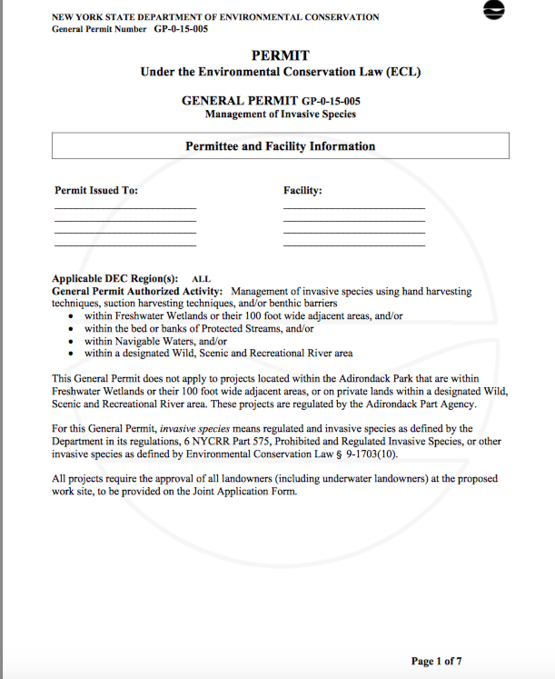 Benthic barriers eliminate sunlight and kill invasive aquatic species. They can only be used if new infestations are identified within the past two years. Benthic barriers may not be installed between March 15th and June 30th and must be removed within three months of installation.