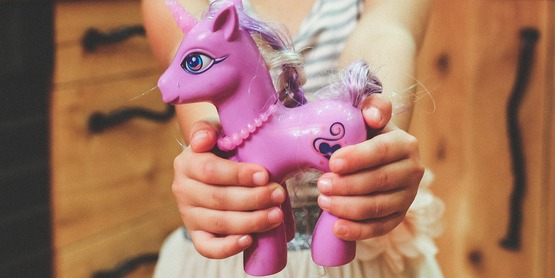 A girl holding a toy unicorn

Adults sometimes have a hard time remembering what it was like to be a child. One thing grownups often forget is that play is more than just having fun -- it's how children learn. Play is children's work. It helps them learn the different skills they need as they grow and mature. Adults need to take children's play seriously, but also remember that play should be fun.

Choose toys that promote play.
Parents can help make playtime a positive and encouraging time for their children. Their own attitudes towards play will affect how their children feel about it. Choosing appropriate toys and playthings is one way parents can help children get the most out of play. Choose toys with more than one purpose. Versatile playthings encourage children to use their imaginations more, and that adds to the fun.

Toys don't always have to be something purchased at a store. Throwing a blanket over a table to make a tent or playhouse can be just as much fun -- and just as educational -- as an expensive toy.

Parents should remember to buy toys based on children's interests, not their own. A big electric train set may excite Dad, but a young child is not going to get much fun out of it.

Kids can't play archeologist with a television toy.
Buying toys for young children can be a vexing experience. Just navigating the cavernous warehouses that are today's discount toy stores is tough enough, let alone trying to sift through the floor‑to‑ceiling shelves for something that's really worthwhile. The prominent displays always seem to promote toys connected to television shows. What's a parent to do?

Hold out as long as you can before introducing high-priced, television-advertised toys. Instead buy open‑ended materials that make the most of a child's can‑do spirit.

Open‑ended means items that can be used many different ways, depending on the preferences of the child. These include water, clay, play‑dough, sand, blocks and manipulatives such as Legos. All these toys allow children at various levels of their development to meet different needs in exploring and learning about the world.

Take play‑dough, for example. A two‑year‑old will pat it, roll it and cut it into pieces to learn how to manipulate it to their liking. A six‑year‑old, having long ago mastered how to handle the material itself, will build with it. They may mold a face or make a tree with a squirrel under it ‑‑ that is, make something that represents their world.

Toddlers often stack blocks then knock them down, to enjoy the sound of the crash. A preschooler might lay the same blocks out as roads to run cars on, building a town or highway system complete with bridges. An older child might erect an elaborate castle and populate it with figures made of Legos.

These playthings are open and free to become what the child would make it be. There's a lot of choice, flexibility and opportunity for problem solving. Even the toddler engages in problem solving with open‑ended materials like blocks: "I made a big stack once, now how do I do it again?" "I don't want such a big noise; how do I make a smaller one?" "I want the stack to stay up longer; how do I make it stable?"

By contrast, toys connected to a movie or television show such carry with them messages about how they're to be used. You can't play archeologist with a Pokemon figure. The child knows what this character is supposed to do, based on the television show or video. Consequently the play, instead of being the child's invention, becomes more an imitation of the scriptwriter's ideas.

Once the dam is breached and the first of the movie/television theme toys enters the house, it's hard to hold back the flood. In its worst extreme, a child could wake up in their Pokemon pajamas, pull back their Pokemon comforter, pad down to a breakfast of Pokemon cereal, go off to school carrying a Pokemon lunch box, eat a mid‑afternoon snack of a Pokemon candy, come home and watch Pokemon cartoons, and end the day back in their Pokemon pj's snuggled under their Pokemon comforter. These products have the very subtle effect of taking away children's ideas and replacing them with someone else's. There's little room for a child's own creativity when they live in this Pokemon world.

Even when Barbies, Power Rangers and Lion King figures have infiltrated your house, try to limit the number of these kinds of toys and balance them with increasingly complex combinations of the basic open‑ended materials the child has had all along.

Children's play is fundamental.
Child's play is more than fun and games. It's how children learn to master their world and acquire the important cognitive, physical and social skills needed for success in their future endeavors. Through play, children develop language skills, learn problem-solving and decision-making, and acquire motor skills, and coordination.

For children of all ages, open‑ended materials allow them to choose something of their own liking, initiate a task, persist at it and finish it to their own satisfaction. They encourage a child's own creativity and problem solving, the development of their own meaning‑making. All of these foster a child's "can‑do spirit."

The public library and book stores have many books with lots of ideas for open‑ended playthings that will challenge children's creativity. Books such as Raceways: Having Fun with Balls and Tracks by Bernie Zubrowski show how to take open-ended items and make raceways, games, even motorized machines by adding batteries, electric doorbells and switches, C‑clamps, coat hangers, doweling, paper plates, and a host of other easily available materials