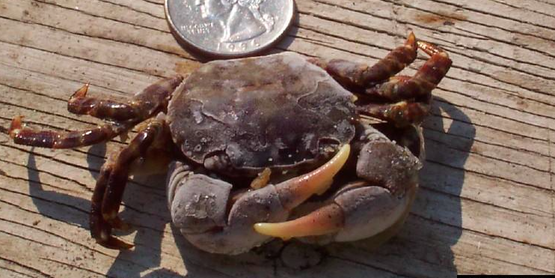 The Asian Shore Crab (Hemigrapsus sanguineus) originated in the western part of the Pacific Ocean, near Japan, China and Korea. It was first identified in the U.S. in 1988 at Cape May, New Jersey and now ranges from Maine to North Carolina.  It is thought to have arrived in the United States as larvae in ballast discharged from cargo ships from these areas. It competes for similar habitat to native blue crab, rock crab, and lobster.  The Asian Crab's breeding season is twice as long as native species so its wide-ranging appetite and growing population threaten both coastal ecosystems and aquaculture operations.

Eat The Invaders: Asian Shore Crab provides background information on this species as well as recipes for its preparation.

Effects of Asian Shore Crab in New England - an article on the role of foraging in the success of invasive Asian shore crabs in New England.

Find recipes for how to prepare Asian Shore Crab and other edible invasive species
on the EatTheInvaders.Org website.