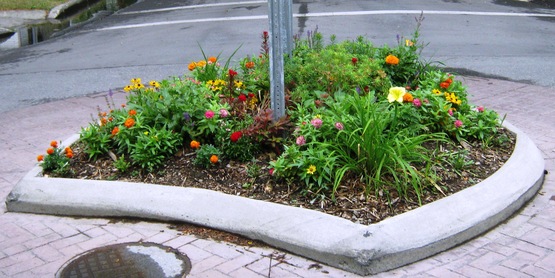 The small rotary at Center St.and Plain St. is planted with bulbs, annuals and perennials.

The Rudbeckia mural at the Rainshadow garden

A small triangle on Hancock St across from Purity Point

One of the Welcome to Ithaca signs

Planter boxes at Tompkins County Center for the Aging on W State St.

A small triangle on Clinton St and Meadow St.

The Welcome to Ithaca Sign on Route 89 in Cass Park

A small planting by CSMA on E State St.

Bridge to Science is a registered Monarch Waystation

Scattered around Ithaca are about 25 secondary planting sites--smaller and less obvious than the Beautification Program's primary sites.   We usually do not schedule work sessions with the Beautification Brigade at these sites, instead taking care of them with our staff and interns.

The City of Ithaca designed eight traffic corners to be bumped out—extending the corner sidewalks into the streets and narrowing the street widths. The work was done in late summer of 2015. The two intersections (four corners) on Seneca St. were designed and built as rain gardens, including a cut out in the curb and a grate overflow leading to the storm sewer system. This allows rain water to fill the garden area and overflow into the water system. The two intersections (four corners) on Green St. are bumped out without the rain garden aspect. All are planted with an assortment of shrubs, perennials and grasses, including many native species.

The point of land at the bottom of the Seneca Street hill before the intersection of Aurora St. was newly planted in fall of 2018 with tulips and daffodils. A new planting of perennials and grasses was also added to provide sustainability.

This planting is in front of the Quick Fill gas station on route 13, near Ithaca Plaza.

This small area was replanted in the fall of 2016 with a Curly Willow in the center and a symmetrical planting of Sedum Autumn Joy, Coreopsis, Butterfly Weed, Purple Salvia, Little Bluestem grasses. Bulbs include daffodils, tulilps, lilies. Annuals add color for the summer season with Petunias and Marigolds.

Wooden welcome to Ithaca signs are located at all major entries to the city of Ithaca: Route 13/34/96 from the south, Route 79 east and west and Route 13 from the north. Each sign is mounted on wooden posts with a small planting area below. Petunias and Black Eyed Susans brighten the planting all summer, following a mix of Daffodils and Tulips in a mix of yellow, orange and red that burst forth with color early in the spring.

An incomplete project on the Waterfront Trail by the Cayuga Inlet behind Island Health. Includes a planting of Daylilies and Echinacea by a plaque from the Ithaca Garden Club. The area between the trail and the water underwent a big renovation in 2017 and was planted in the spring of 2018 with a variety of native and pollinator plants, with sponsorship from NYSEG.

A small planting at the edge of the parking lot on State St. next to the railroad tracks and Route 13. Coreopsis, Gaillardia, poppies, Echinacea, Daylilies, Chrysanthemums, annuals. The bus station was closed in 2018 and all bus services were moved to Green St.  The building itself  given landmark status in January of 2019,  but there are no current plans for occupancy.

Friends of the Library

Across Esty St. from the Friends of the Library building, tulips bloom for the spring sale. For the fall sale, ornamental kale lines the walkways.

There is small traffic island at the intersection of route 13 and Clinton Street. Bulbs, Yarrow, Delosperma, Petunias. Euphorbia in spring, species tulips, several varieties of sedum were added in 2016 and 2018.

We take care of a number of small planting areas on three sides around the garage on Tioga, Seneca, and Aurora Streets.

Annual and perennial Rudbeckia hirta Black Eyed Susan are planted under the mural of the same flowers.  Artist Kellie Cox painted the mural in 2013 and we have been matching it with plantings ever since.

A small planting by the entrance to the ice rink. Bulbs, perennials and annuals. Started in 2012.

In the fall of 2016, Beautification planted Daffodils King Alfred and Goblet as well as Crocus by the  Memorial.

In fall of 2018, Beautification planted the newly formed sidewalk strips with grasses and perennials, plus bulbs in partnership with the City Forester.

A small planting on Lincoln St. across from CCE-Tompkins (home of Community Beautification Program). A path leads to a bridge across Fall Creek to the Sciencenter. This planting is a registered Monarch Waystation and has many butterfly friendly plants.

A tiny rotary at the intersection of Plain St. and Center St.

This planting has been adopted by neighborhood volunteer Judy Jones with support from the Community Beautification Program.

Two new gardens and a woodchip pathway were completed during the season  in 2018, with a planting of annuals, perennials, shrubs and grasses, including ornamental boulders.  Bulbs were also planted in the fall of 2018.