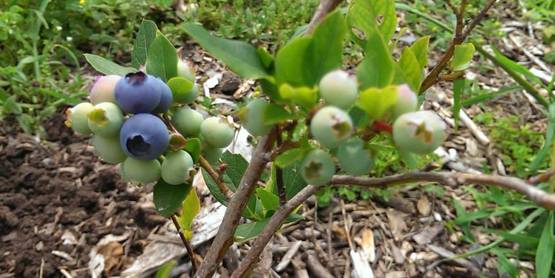 QUESTION: We'd like to grow some blueberries. What should we learn first?

ANSWER: Blueberries have the distinction of being one of the few native American fruits commonly grown. Wild highbush blueberries were selected for desirable characteristics such as taste, productivity, and size back in the early part of the 20th century. There are also varieties of the lowbush blueberry, a hardier as well as shorter species common to Maine. Hybrids of the two species have been developed, intermediate types known as half-high blueberries.

Blueberries are usually free of insect pest and disease problems, but they are very particular about their soil and growing conditions. The soil MUST be acid (pH 7 is neutral, and blueberries prefer around pH 5.0). Blueberries are related to rhododendrons and azaleas, so if you grow such bushes with nice dark green leaves, it is probably acid enough for blueberries too.

A pH test is always recommended before planning on a blueberry planting. If your pH is alkaline (above 7.0), growing blueberries will be a struggle, and perhaps you should consider raspberries instead. If your pH is slightly acid, such as pH 6.8 or lower, you can grow blueberries if you are willing to put in the extra work, both at planting time, and periodically afterwards.

When I planted my blueberries in 1994, in soil of pH 6.8, I followed the recommendations of Cornell's berry expert, Dr. Marvin Pritts. I dug each hole 18 inches deep and wide, and replaced half the soil with damp peatmoss. I added elemental sulfur, the acidifying agent, throughout the 18 inch depth. After a few years of growth, I had flowers, which the deer nipped off (only that once; I was lucky). Now I have fruit from early July until early September. 'Duke' is my favorite early variety, and 'Elliott' is my favorite late variety. I have 10 plants, but 8 different varieties, which promotes better pollination and larger fruit.

I fertilize in spring with ammonium sulfate, which is both a fertilizer and an acidifier (do not confuse this with aluminum sulfate, which you don't want). I periodically check the pH and sprinkle more sulfur on the soil under the bushes before I add more woodchip mulch. I water thoroughly in dry spells, because blueberries are drought-sensitive, and I try to keep 2 or 3 inches of woodchips as a mulch.

For more information on blueberries, including varieties, nursery sources, and pruning recommendations, consult the Cornell gardening website, fruit section, or call the horticultural hotline at Cornell Cooperative Extension of Tompkins County at 272-2292.