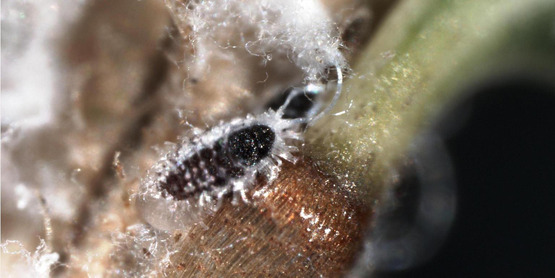 Question: I've heard that our native trees are being attacked by foreign insect pests. What can I do?

Answer: Native trees are under attack by several imported insect pests. A few years ago, the hemlock woolly adelgid was spotted near Taughannock Boulevard by an alert arborist, who brought a sample into Tompkins County Cornell Cooperative Extension. The adelgid had probably been there a few years, but the homeowner hadn't noticed. Since then, the adelgid has been confirmed at a number of sites, most but not all, near the lake. Early on, there was some discussion that cold winter temperatures were a limiting factor to its spread, but that doesn't seem to be the case.

Hemocks are a vital part of the ecosystem, as shade-tolerant evergreens that grow well on the slopes of the gorges. They prevent erosion as well, which preserves stream quality. Look for the conspicuous white fluff secreted by the insects now, before it fades away. Here is a website to check out, with additional links:
http://entomology.cornell.edu/cals/entomology/extension/idl/loader.cfm?c...

The Emerald Ash Borer (EAB) has been in the news a lot since it emerged in the Midwest. It has already killed many millions of ash trees, and it is expected to wipe out all the native ash species. Unlike many pests, which attack already weakened trees, the EAB attacks healthy ash trees as well and kills them in 2-3 years. White and green ash were frequently planted as street trees, following the Dutch elm disease that eliminated American elm from streets and parks. Therefore, the EAB poses an enormous financial challenge to both homeowners and municipalities.

Quarantines are in place to prevent infested ash firewood or lumber from being transported to new areas that aren't infested yet. The main purpose of these quarantines is to slow the spread of the insect. This will give the public and municipalities more time to plan for the EAB. It is vital to educate the public, many of whom do not realize what an ash tree looks like. If you would like to help with ID of ash trees for the public, please contact Monika Roth at Tompkins CCE, mr55@cornell.edu

Here is a website to check out, with additional links:
http://entomology.cornell.edu/cals/entomology/extension/idl/loader.cfm?c...

Diversity is the message here. When planning and planting street and park trees, or a home landscape, always strive for a variety of trees, and unrelated ones at that. Four species of maples is not a diversified landscape, as related plants share disease or pest problems. Selecting a linden, an oak, a pine, a ginkgo, is one example of a diversified strategy. Try to avoid the most commonly used species, as overplanting one kind may turn an unimportant pest into more of a problem - one example where this has happened is the honey locust, also much planted after Dutch elm disease killed off the elms.