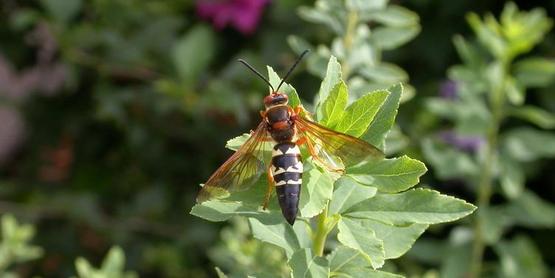 Stinging Insects in the Garden

Question: What can I do about all the "bees" at my house?

Bees, wasps, yellowjackets, and hornets are all abundant at this time of year. These insects, which are all related to one another, build up in population throughout the growing season. Right now, the colonies are approaching the maximum number of individuals, so they are much more obvious than they were earlier in the summer.

Honeybees are extremely important as pollinators of many of our food crops. They are unique in having a colony that lives over the winter, workers and all. All the other related insects have temporary colonies that do not live over the winter. Instead, only the fertilized females overwinter and start new nests or colonies in the spring.

The native bees (over 3000 species in North America), wasps, hornets, and yellowjackets are also beneficial insects. Many of them are important pollinators. Bumblebees, for instance, are active in cool damp weather when honeybees are not. Wasps and others are predators on insects such as caterpillars, which they use to provide a larder for their offspring.

Problems arise when the nests are close to human habitation, and people get stung. Ground-nesting bees can be a hazard in lawns. Sometimes, one can spot them flying in and out, and mark the location to avoid at the next lawn-mowing. Skunks will occasionally dig out ground nests, leaving a hole as big as a basketball. There are pesticide sprays available, or one can try flooding the ground nest with a hose, but I find avoidance is simplest.

For paper wasps and white-faced hornets, avoidance may not work, depending on the location of their amazing papery nests. Wasp/hornet sprays are available, which will knock the insect out of the air. Using a long-handled metal rake to pull the nest apart is risky, but if you decide to try it, very early morning is the best time, when the insects have had all night to cool off. Go out as soon as you can see what you are doing, before the sun is up. Alternatively, throw a heavy-duty plastic bag over the nest, cut the branch the nest is fastened too, seal the bag with duct tape, and put it in the freezer for a while.

If possible, try to avoid nests for the next several weeks. When the hard frosts come, the colonies will die off (except for honeybees). Fertilized females will overwinter here and there, so vigilance is still a good idea.