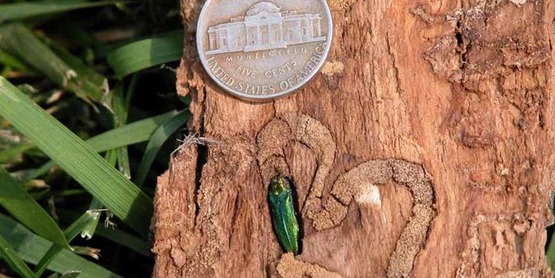 Question: I've heard that an insect is killing ash trees. Do we have to worry about that locally? And how can I tell which are ash trees?

Answer: The Emerald Ash Borer (EAB), a small green beetle from Asia, has killed millions of ash trees in the Midwest and Canada since 2002 and is now present in seven NY counties, including Steuben. Ten additional counties, including Schuyler and Yates, have been quarantined in an effort to slow the spread of this insect. Many new outbreaks of EAB have probably been caused by the movement of firewood. Therefore, the NYS DEC has also enacted a 50-mile limitation for the movement of untreated firewood.

None of our native species of ash trees has any resistance. Trees often die within 2 or 3 years of infection. Ash trees make up 7% (900 million trees!) of New York's 18 million acres of forest. Ash is one of our most valuable hardwoods for furniture and flooring and also has unique uses such as baseball bats and woven baskets. Forest owners are facing large financial losses: the current estimated inventory of white ash sawtimber in NYS is worth over 1 billion dollars, but not all of it can be salvaged before the EAB destroys it.

Slowing the spread of EAB increases the chance of finding a viable solution before our ash trees become extinct, and it also reduces economic loss as landowners have more time to salvage ash timber.

In addition, ash trees have been heavily planted as city street trees and in landscapes (often as replacements for the elms that died from Dutch elm disease). The only treatment for landscape or city trees is multiple trunk injections of pesticide, an expensive proposition that may not be very effective in big old trees. Cities and homeowners are facing large costs for the removal of hazardous dead ash trees.

Ash trees are among the relatively few local trees with opposite branching on the stem, rather than alternate branching. In addition, ash trees have pinnately (arranged like a feather) compound leaves made of five to nine leaflets. When these fall off in autumn, the remaining twigs look relatively thick, compared to the lacy terminal twigs of maples (maples have opposite branching, but simple leaves instead of compound). Ash trees often have purple or yellow fall color. The seeds (on female trees) are winged samaras that resemble canoe paddles, appear in clusters, and turn tan in the fall.

For more information on gardening, including the Emeral Ash Borer, consult the Cornell gardening website, fruit section, or call the horticultural hotline at Cornell Cooperative Extension of Tompkins County at 272-2292.