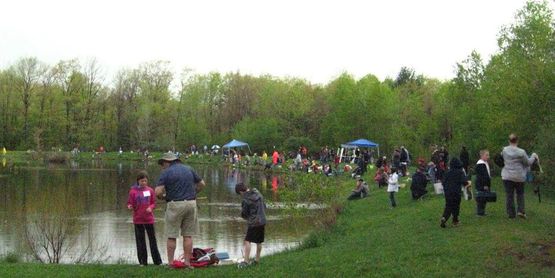 The Hydrilla Task Force spread awareness about hydrilla at the Fishing Derby in May! 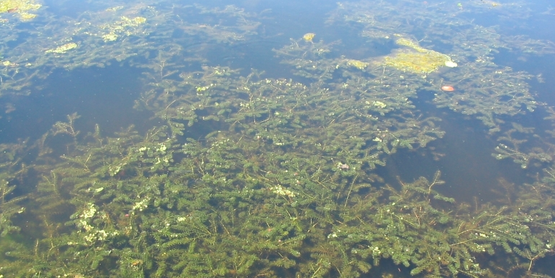 Approximately 200 locations were sampled in the Inlet prior to the herbicide application for 2012. In part the effort was to track hydrilla growth and determine the optimum time for endothall application (5-8 inches??). The other goal was to record all species presence and abundance in the Inlet. This will be tracked throughout the treatment years to determine if there is any change in community composition. Some plant sampling was done in 2009 in advance of the expected Inlet dredging project, that data set is considered part of the baseline.

The Racine-Johnson Ecologist crew, in conjuction with Cayuga Lake Floating Classroom and Ichthyological Associatess, completed 2 rake-toss surveys on up to approximately 1400+ locations in the Inlet and southern Cayuga Lake and no hydrilla was found. All plants were identified to species. Species abundance was determined at all locations.

Lake sampling occurred during July and August. Sampling was focused on the shallow southern end and shorelines of the lake. Sampling could not occur before the herbicide treatments, as plants in the lake were slower growing than plants in the Inlet. However, results from the herbicide concentration monitoring data show that neither hebicide is reaching the lake at effective treatment doses. Recent plant sampling within the farthest reaches of the treatment area (where the inl et meets the lake) support the conclusion that herbicide is having no impact on plants in the lake.

On August 17, 2012 a diver harvested 6-inch shoot of hydrilla was found where the inlet meets the lake. Further surveying in this area found no other traces of hydrilla.

Bob Johnson, aquatic plant specialist with Racine-Johnson Aquatic Ecologists, says the endothall was 100% effective at killing hydrilla vegetation within 3 days - with the exception of up by the fish ladder where he was still finding plant material during the early sampling days.

Another sampling for hydrilla in the inlet was done on June 13, 2012 and no surviving hydrilla plant material was found. Bill Haller, from the Center of Aquatic and Invasive Plants at the University of Florida, was one of the national experts we consulted to develop this plan. Haller visited the site and  commented that the use of both chemicals (endothall and fluridone) was specifically selected to make sure early growing plants were knocked back to avoid Cayuga Inlet closure or plant fragmentation/spread.

Endothall treatment was a success. The herbicide applicator, Allied Biological, finished the endothall application at 9:12 pm, June 26, 2012. The inlet was closed for about a day and then reopened. It remained open the rest of the summer. Results of monitoring the endothall in the water were posted as they became available. Read a summary of the herbicide plan, written immediately before treatment, facts and details about endothall and map of maximum treatment area.

Fluridone treatment occurred from July 12 to October 31, 2012. Fluridone herbicide was applied at very low levels. Results of monitoring the fluridone throughout the inlet.

On July 12th, the application of Sonar Genesis (fluridone liquid) and Sonar One (fluridone pellets) began in the Inlet. These herbicides were supplied by SePRO and applied by Allied Biological. Allied Biological also fabricated special injection units and maintained the equipment throughout the period of application. Fluridone was used to prevent plant re-growth and kill any sprouting hydrilla tubers.

Sonar Genesis was applied at a low dose (2-8 ppb) through three metered injection units: one at the DEC fish ladder on Cayuga Inlet, one on Cascadilla Creek, one on Six Mile Creek to provide the correct herbicide concentration throughout the treatment area.

Sonar One pellets were used periodically in areas that might not reach or stay at the correct concentration, In order for the treatment to have been successful, the concentration of fluridone in the water must have remained within this range (2-8 ppb) throughout the entire treatment.

The special injection units consisted of a drip applicator and a distribution unit. The amount of herbicide expelled from the drip unit could be varied with the stream flow. Information about the amount of water flow was collected before the herbicide treatment in order to be able to calibrate the injection units and have the dosing be as accurate as possible. The dosing by the drip applicators was controlled remotely and adjusted as required. The distribution units were able to send text messages to nearby Task Force officers if there was a problem.

Sample points in a donut-shaped areas where the inlet meets the lake found concentrations of fluridone lower than needed to be effective. The Task Force decided to boost the fluridone treatment in this area especially after a single piece of hydrilla was found at the wall leading to the red lighthouse by the mouth of the lake on August 17. Injection rates were increased from 5 ppb to 8 ppb (the permit limit). A total of 4 pellet treatments were applied in the 'donut' area.  Plant monitoring in the donut area was increased and no further hydrilla was found.

The 2012 Fluridone Treatment ended October 31, as planned. Weekly sampling continued until all concentrations of fluridone in the inlet were below 1 ppb. Due to DEC regulation, the warning signs around the inlet stayed in place until all sampling points showed this low level as well. Monitoring was completed November 26 and signs taken down later that week by city crews.

Tuber monitoring is ongoing to determine the percentage of dormant tubers, assess the fate of tubers impacted during the two herbicide treatments and to perform some basic studies on morphology and physiology of the tubers. Bob Johnson repeatedly measured the density of tubers in the bottom sediment of the inlet using post-hole diggers to collect samples. In the spring of 2012, tuber density ranged from 150-800 per square meter. His last tuber count for 2012 (December 3 and 4) found fewer than 10 per square meter. About 50 percent had germinated and would be unlikely to survive if we have a cold winter. However, little is known about tuber over-wintering capacity (tuber longevity).

The Task Force supports continuing this type of plant monitoring throughout the lifetime of the eradication effort. The goal is to determine presence/absence of hydrilla and to detect any unintended impacts on the aquatic plant community.

The Local Hydrilla Task Force drafted an initial Hydrilla Work Plan (152 kb pdf) in 2012. This is a first attempt to articulate the various tasks, and estimated costs, that are expected to be needed to reach the goal of eradication.

The 2012 Plant Monitoring Report is available for viewing.

Below are the outline treatment areas of fluridone Sonar Genesis and Sonar One. 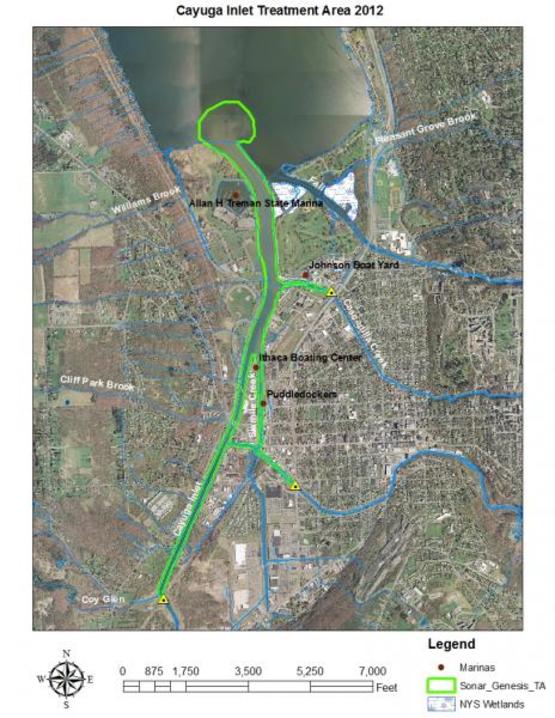 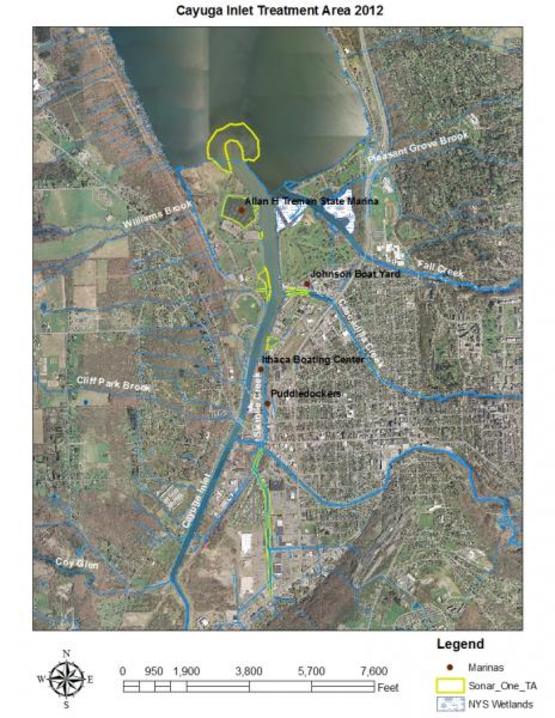