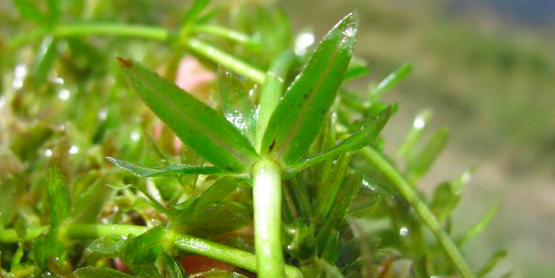 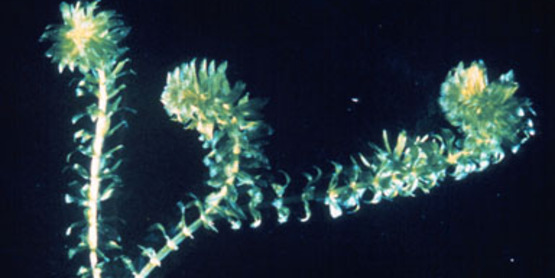 On Tuesday, July 21, the first hydrilla treatment of the 2015 season took place. Sonar H4C pellets (Active ingredient: fluridone) were applied to a 30-acre treatment zone in the southeast corner of Cayuga Lake. Additional “bump” applications and active water quality monitoring within this treatment area continued throughout the season. An article was released in the Ithaca Journal to announce the treatment.

Water monitoring results for fluridone in the SE Corner of Cayuga Lake are posted as they become available.

The inlet was closed August 18 for application of the contact herbicide Aquathol-K (Active Ingredient: endothall). Swimming and bathing was prohibited for 24hrs in conjunction with this application of Aquathol-K, and only in the area where the herbicide was used (Cayuga Inlet). Aquathol-K was not used in the lake and therefore there was no herbicide-related restriction in the south end of the lake.

Prior to treatment, a preliminary dye trial was performed in Fall Creek on June 25, 2015. This allowed the Hydrilla Task Force to get an idea of flow dynamics in Fall Creek and how it might affect distribution of herbicide applications later in the season. In order to determine this, samples were taken downstream from the dye input and analyzed for dye concentration. Dye concentrations were near targeted levels (7ppb) until they reached the Stewart Park Pond. At this point, concentration levels dropped considerably (1-3ppb). Dye was also found at the Cascadilla Boat Club, but the concentrations were also low (<2ppb). The slow dispersal was most likely due to high water levels from recent rainfall. Water levels, and thus dispersal, are anticipated to be lower during the actual treatment.

1) UPI (herbicide producer) and Allied Biological (licensed herbicide applicator) conducted a dye study the day of treatment to determine flow dynamics in Fall Creek, and thus the best placement of the Aquathol-K (active ingredient endothall) injection unit/line. Aquathol-K injection in Fall Creek was initiated on 8/25/15. Treatment continued for 36hrs and ceased around midnight on 8/26/16. Staff from both Allied Biological and UPI were on site throughout the duration of the treatment. Aquathol-K was applied using airboat,/johnboat, and backpack application equipment in the shallow/backwater areas of Fall Creek (Stewart Park Pond and its feeder stream, golf course lagoon, Fall Creek cove, and the wetland area NW of the golf course lagoon).

Herbicide applications were conducted by Allied Biological (licensed herbicide applicator). Monitoring of the herbicide levels in the water was conducted by the Community Science Institute, on behalf of the Hydrilla Task Force, Tompkins County Health Dept., and NYS Dept. of Environmental Conservation. View the monitoringresults and locations (maps). Read details of the monitoring protocol.

On Tuesday, 9/1/15, the low-dose, systemic application of Sonar Genesis (pellets) in shallow areas and Sonar One (liquid) treatments via injection units was initiated in the Cayuga Inlet. The active ingredient in both Sonar products is fluridone. The Cayuga Inlet was not closed during treatment. The treatment continued into October to address any possible regrowth of hydrilla following the initial Aquathol-K application. Representatives from SePRO (herbicide producer) set up and calibrated the Sonar Genesis injection units in advance of the treatment start date. 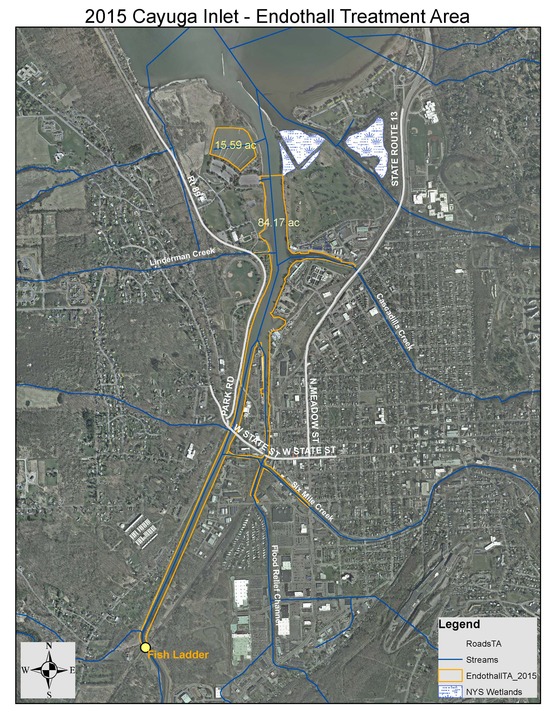 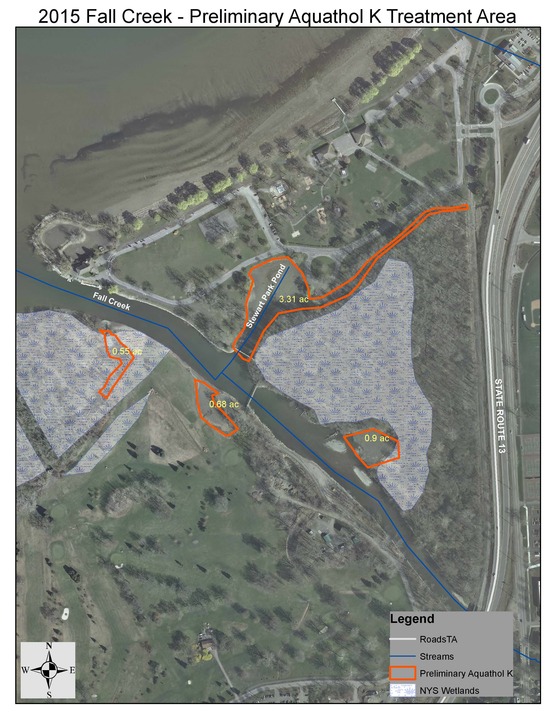 Below are the fluridone (tradename Sonar One) treatment maps for Cayuga Inlet, Fall Creek, and the Southeast corner of Cayuga Lake 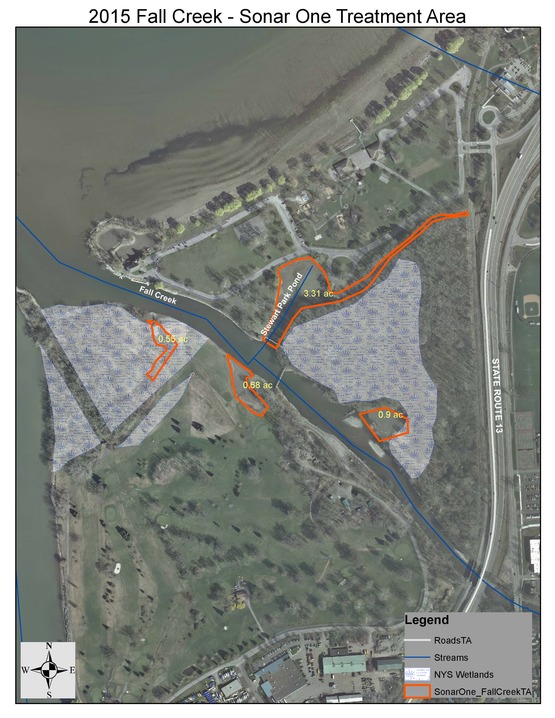 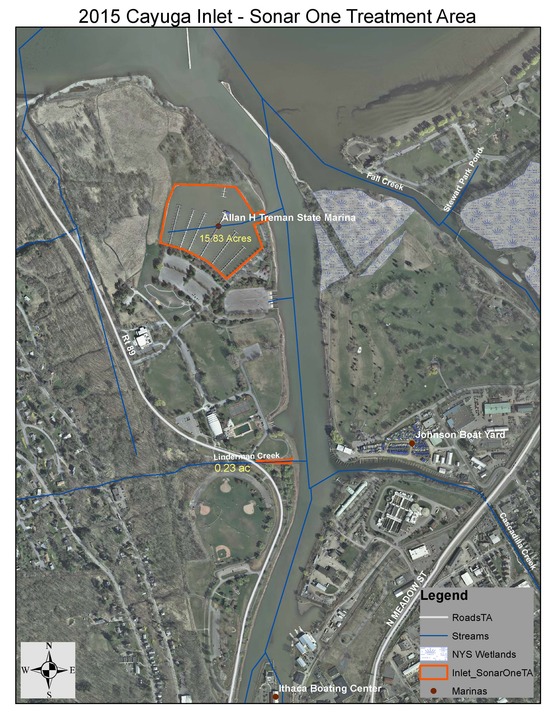 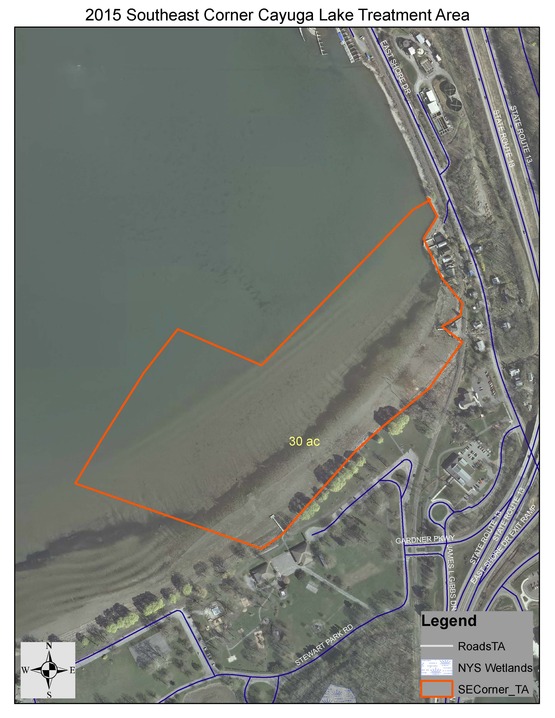 This report lists aquatic plant data collected by surveys in 2015 using the line intercept method (Madsen 1999) in Cayuga Inlet, Fall Creek and Cayuga Lake by Racine-Johnson Aquatic Ecologists of Ithaca, NY. We adapted the line intercept method of survey using the rake toss procedure of collection to determine the presence of plant species and an estimate of the species abundance (biomass) at a given location and time. We depict this 2015 information in tables, graphs, abundance maps and pie charts to provide current information of the aquatic plant community.

Water Monitoring Reports by the Tompkins County Health Department can be found here.

Monitoring of herbicide level in the water is done after all treatments.  View the results, locations and link to protocols.

Herbicide Labels for Use in Cayuga Lake Watershed in 2015. Herbicide labels give legal information such as storage requirements, any restrictions, how and where it can be used, etc. Labels are for specific, brand-name formulations.

The 2015 Plant Monitoring Report is available for viewing.