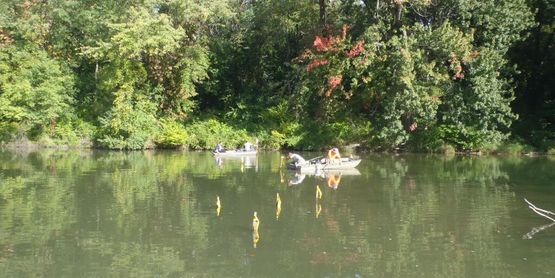 Water sampling after the 2014 herbicide treatment.

As part of the management plan in place, we are required to document the eradication of hydrilla from known locations by the application of herbicides, hand removal and benthic barriers. An equally important monitoring effort continues to document depletion of the non-germinated hydrilla tubers still viable in the sediments as the result of past mature hydrilla.

All 2014 herbicide treatments ended on October 8, 2014 after which we conducted the post-herbicide rake-toss evaluation of plant growth for the Inlet and Lighthouse areas starting on October 21 and ending on November 21. Additionally, with the herbicide treatment of Aquathol K (endothall) to the Fall Creek area on July 17, 2014, followed by extensive SonarOne treatments, we conducted a post herbicide evaluation of plant growth using the rake-toss collection method from October 31 through November 13, 2014.

The Cayuga Inlet was closed to boating traffic and recreation on Tuesday July 29, 2014 for application of endothall. Allied Biological finished application at approximately 6:30 pm Tuesday July 29, 2014 and the inlet was reopened to boating traffic and recreation the next morning, July 30, 2014. Below are the maps of the endothall and fluridone treatment areas in the Cayuga Inlet. 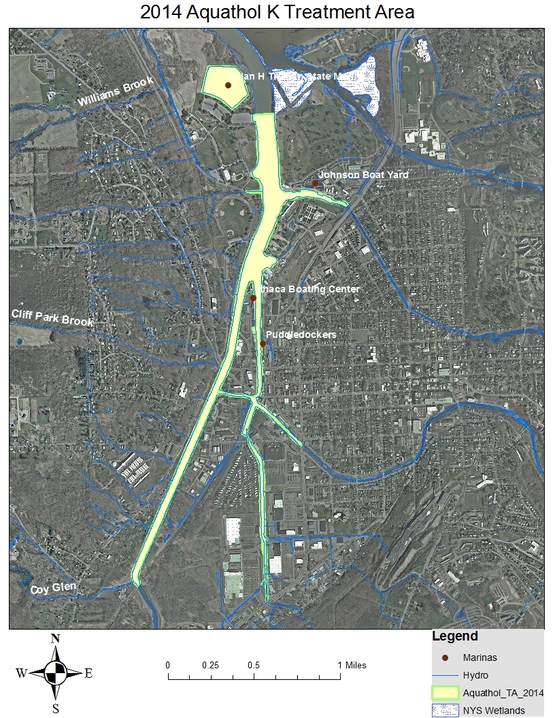 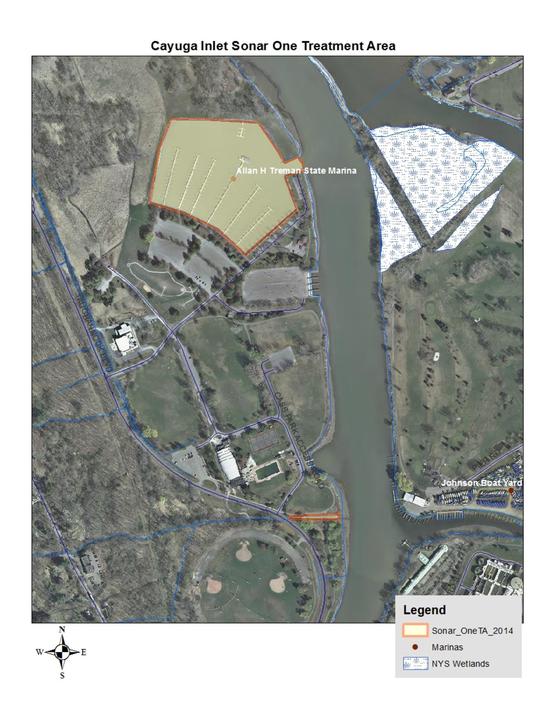 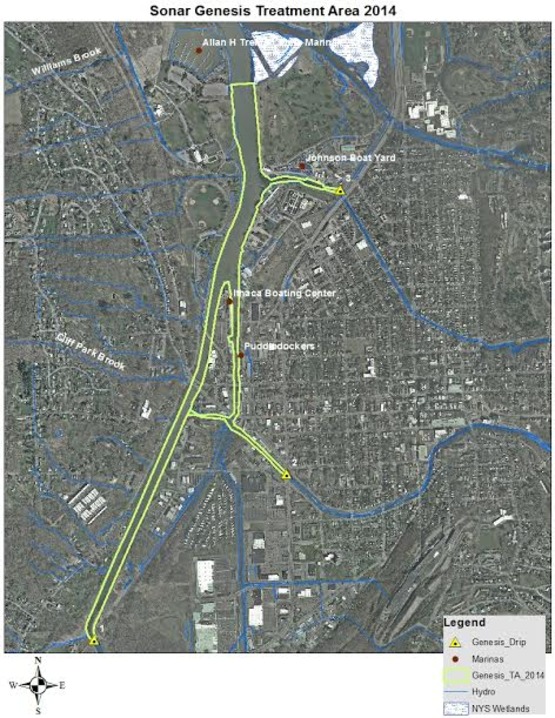 Fall Creek was closed to boating and water-based recreation on Thursday July 17, 2014 starting at 8:00 a.m. for a minimum of 24 hours. The closure included the pond at Stewart Park. The closure was necessary in order to treat the area with the herbicide endothall as part of the hydrilla eradication effort. The treatment went according to plan and Fall Creek re-opened on Friday July 18, 2014 at 8:00 a.m. Below are the maps of the Fall Creek treatment area. 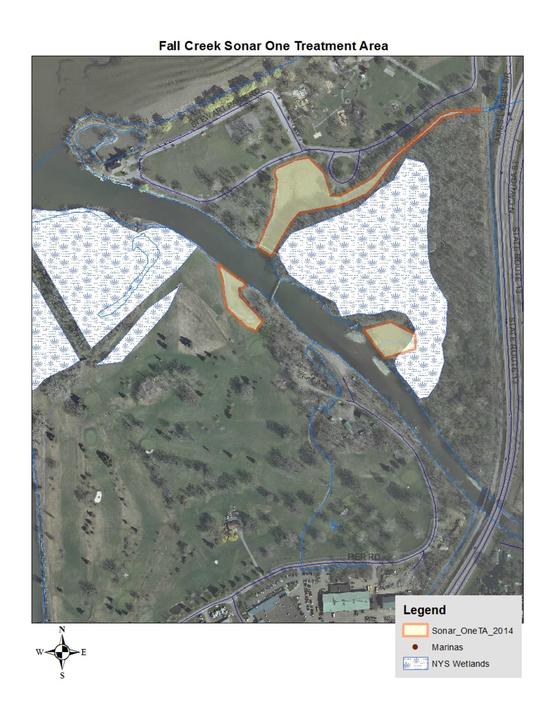 In past years, there has been ecological problems with lampreys within the Cayuga Lake Watershed. Typically, the fish ladders installed in the creeks and other outlets of Cayuga lake are successful in prohibiting lamprey migration and preventing them from breeding. However; when rainfall is heavy during lamprey breeding, the high water levels render the fish ladders useless.  When this happens, the DEC uses lampricide to try and limit the number of lampreys found within the watershed.

NYS DEC fisheries proposed the application of the lampricide TFM (3-Trifluromethyl-4-nitrophenol) for Cayuga Inlet for June 2014. The intent was to treat with lampricide before or after use of herbicides as part of the hydrilla eradication program, but due to high water level the original date of application had been postponed until August.

DEC and the Hydrilla Task Force looked into any potential effects that TFM and the herbicides used to eradicate hydrilla could have on each other. The only study found on this subject concluded that the presence of fluridone can increase the toxicity of TFM to brown trout. In that study the levels of both chemicals were much higher than the levels at which either will be administered in Cayuga Inlet. The toxicity to brown trout was observed at application rates of 15-20ppm (parts per million) for both TFM and fluridone. In contrast, DEC has planned for the Cayuga Inlet application rate of TFM to be 8-9ppm. The Hydrilla Task Force planned rate of fluridone will be 4-6ppb. Although these levels of treatment should not increase the toxicity of TFM, DEC is planning to use the lampricide treatment well before any fluridone treatment as a precaution.

Lampricide application was administered by the DEC on August 20. 2014. The treatment was successful in prohibiting lamprey breeding and did not affect the herbicide treatments administered for hydrilla eradication.

The 2014 Management Plan is available for viewing. For more information about the Eradication Project's management plans, click here.

Curious as to how the Hydrilla Task Force came about their decisions or what other options were available in the 2014 season? The 2014 treatment options  are now available for viewing.

The 2014 Plant Monitoring Report is available for viewing.