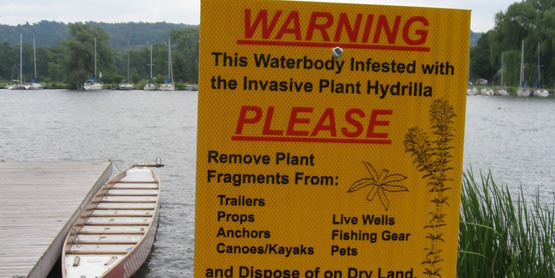 Hydrilla fragments were found Sept. 13, 2016 a few hundred meters south of the Wells College dock during sampling by the Cayuga Lake Floating Classroom with Wells College Campus Greens. Prior to this find, the only known hydrilla population was in the southern end of the lake. The initial finding was a few 5-8 inch fragments in 3.4 meters of water that subsequently triggered additional plant sampling. Bob Johnson (of Racine-Johnson Aquatic Ecologists) found a 5 inch sprig of Hydrilla along the shoreline in the Wells College bay on Sept 17. Once Johnson has delineated the extent of the infestation, the Hydrilla Task Force will determine a course of action. Read details and see map of location.

More information can be found in the PRISM website, Ithaca Journal article 9/23/2016, WHCU News Radio, and the Citizen Newpaper.

Read the Ithaca Journal article 9/25/2016 for a fact sheet about Hydrilla.

Given the extensive reductions observed in hydrilla populations from 2013 –2015, and a lack of hydrilla growth observed in Cayuga Inlet in 2014 and 2015, the HTF will scale back herbicide applications in Cayuga Inlet in 2016. This translates into a single Sonar application within Cayuga Inlet for the 2016 season, and no Aquathol-K (contact herbicide) application. With no Aquathol-K application planned for 2016, the Hydrilla Task Force (HTF) will NOT close the inlet to boat/recreation traffic for 24hrs in association with herbicide treatments. 2016 will be the first season that the inlet will remain open during treatment since Hydrilla Project inception in 2011.

Although hydrilla populations have been significantly reduced in Cayuga Inlet, continued management pressure will still be needed to address small remaining tuber populations. These measures will help ensure that hydrilla has been fully eradicated, and that re-infestation does not occur.

For 2016, the HTF will utilize the low-dose, systemic herbicide Sonar (active ingredient: fluridone) to address remaining hydrilla populations and potential growth. Sonar Genesis (liquid) will be injected into the main channel of the inlet via an automated injection unit staged at the NYSDEC fish ladder (southern portion of inlet. See Figure 1). Sonar H4C (pellets) will be applied in backwater zones of Cayuga Inlet to provide additional treatment coverage for high priority areas (See Figure 2, below).

Following initiation, Sonar application in Cayuga Inlet will continue for 60 –90 days. Cessation of Sonar treatments after 60 days, but prior to 90 days, will depend on hydrilla germination and growth observations conducted by Racine-Johnson Aquatic Ecologists. If hydrilla growth is sparse/non-existent, Sonar treatment will be ended early to reduce herbicide application quantities and overall Project costs. 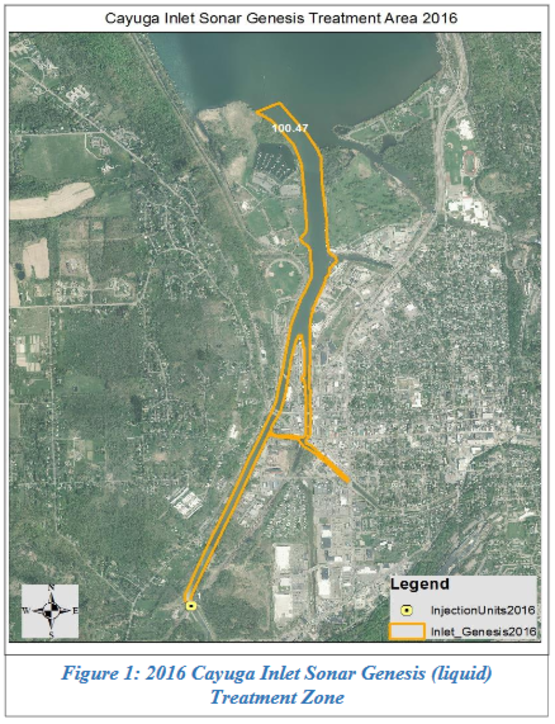 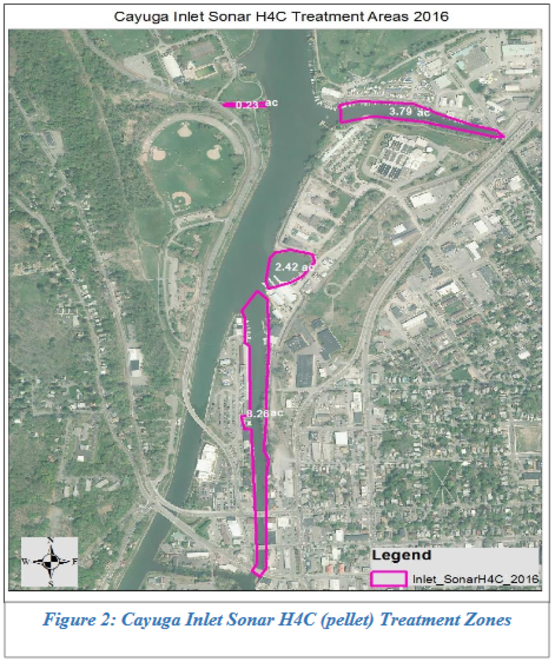 Primary treatment will consist of sub-surface injection of the contact herbicide Aquathol-K (active ingredient: endothall) to the main channel of Fall Creek over a 24hr period (Figure 3). A pump system will be installed at an upstream staging area in Fall Creek. This injection system will meter in the appropriate concentration of Aquathol-K product. Additional application of Aquathol-K to Fall Creek backwater areas will be conducted by boat/backpack equipment to ensure proper treatment coverage (Figure 4, below).Herbicide applicators and representatives from United Phosphorous Inc. (Aquathol-K producer) will be on hand to conduct the treatment. 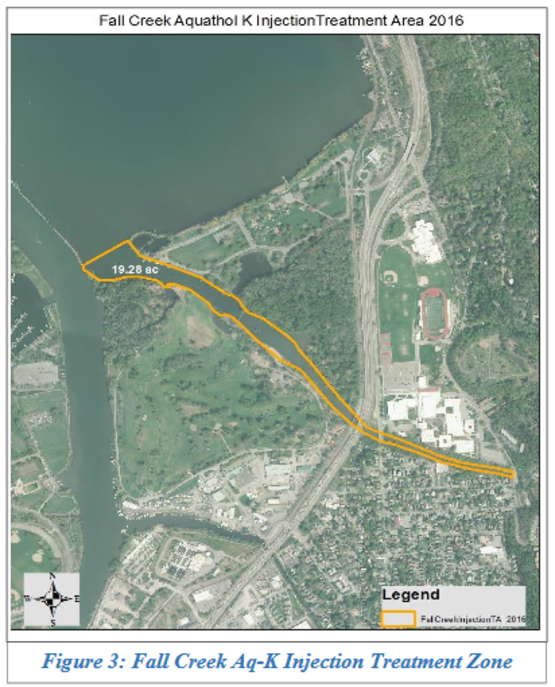 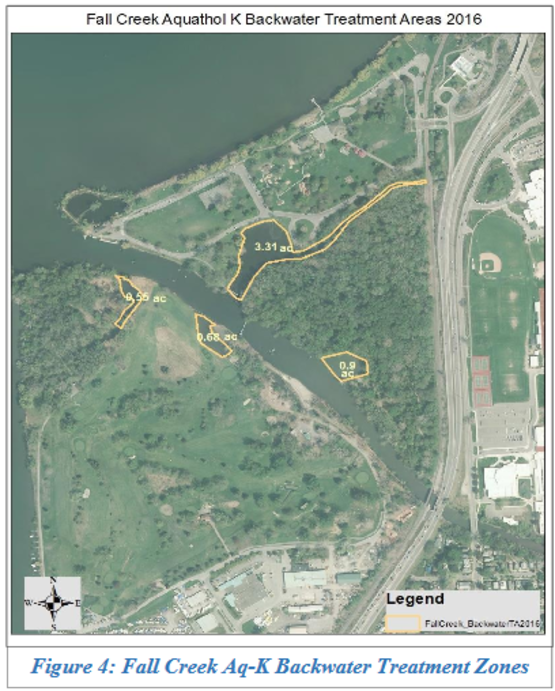 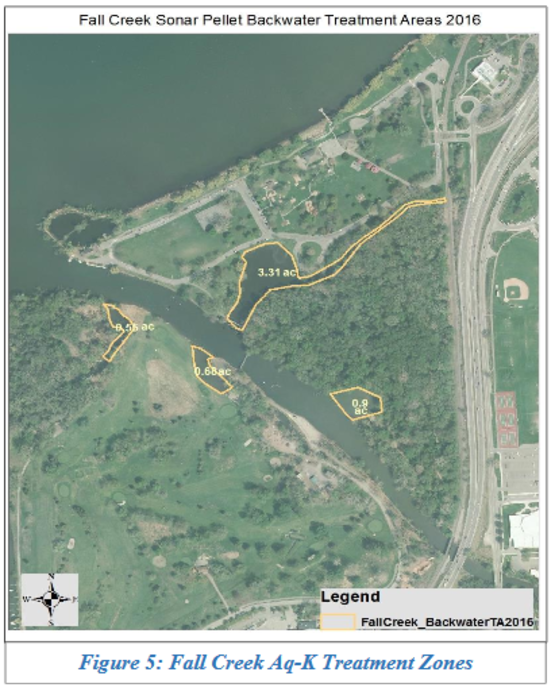 With the high exchange rates and turnover of water in southern Cayuga Lake, maintaining target herbicide concentrations and retention time, even at the lower dosage rates of 1 to 2ppb, was incredibly challenging. Given the results observed in 2015, the HTF determined that herbicide application to the open waters of southern Cayuga Lake would not be the most effective hydrilla management strategy in 2016. 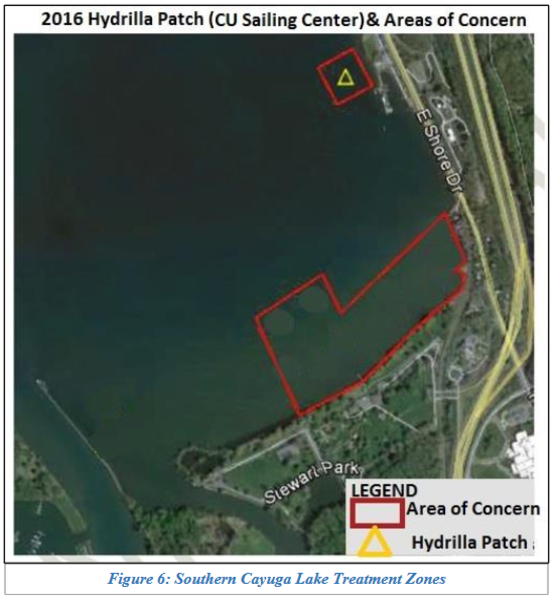 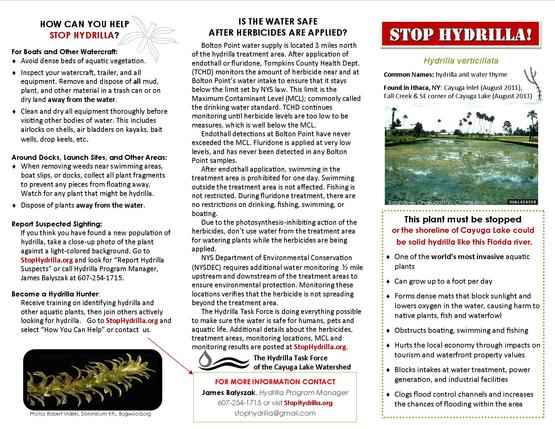 Two-page brochure, STOP HYDRILLA! (471kb pdf), covers the discovery of hydrilla in Cayuga Inlet, what is being done to eradicate it, and how you can help.

View the 2016 results and sampling locations for monitoring herbicide concentrations. Lab results are updated on the Tompkins County Health Department website as they become available.

The Hydrilla Task Force does extensive water quality monitoring and sampling for the duration of herbicide application, until herbicide levels are low enough they cannot be detected by the laboratory. This helps to ensure public safety and the health of the aquatic plant community.  Read the details of how and what we monitor.

The 2016 Plant Monitoring Report (pdf, 33 MB) is available for viewing.