The purpose of this project is to expand our pilot study on whether the presence of a substantial college-aged population in Ithaca, New York delivers a significant load of select compounds to the Ithaca wastewater treatment system, and if the current concentrations pose an environmental threat. Relative to the general population, college students are heavy users of ADHD medication, antidepressants, and birth control pills. Each of these classes of emerging pollutants are excreted and enter the sewage treatment system, potentially harming aquatic life if they remain active in the water fraction. We intend to determine the contribution of the college campuses to Ithaca Area Wastewater Treatment Facility (IAWWTF) influent, and the success of IAWWTF in removing these compounds before the effluent is released into Cayuga Lake by comparing concentrations at different points in the system (drinking water intake, influent, effluent, and lake water) and at different times of year (when students are absent, present, and during final exams) using 24-hr time weighted automated sampling and GC-MS (USGS NWQL, Denver, CO). We also intend to investigate potential behavioral modifications in fathead minnows (Pimephelas promelas) at environmentally relevant concentrations of select emerging pollutants. The contaminant data, combined with the toxicity tests, will provide a picture of the degree of contamination and potential ecological consequences that could be applied to other municipalities, especially college towns.

Despite the rapidly growing concern over emerging pollutants, there are no established regulations for pharmaceutical control, largely because of a lack of scientific consensus (US EPA, 2006). Of the 610 WWTPs in New York, pharmaceutical analysis has only occurred at very few: as of 2010, only three WWTPs (excluding NYC) in which only seven pharmaceuticals were studied (Phillips et al. 2010). The Ithaca area, with the combined wastewater from two colleges, could contribute a substantial level of pharmaceutical pollution to Cayuga Lake. Preliminary analyses of Ithaca wastewater effluent revealed the presence of the anticonvulsant carbamazepine and the androgen hormone dihydrotestosterone at concentrations up to 0.3µg/L and 1.53ng/L respectively (unpublished data). However, these are only two of hundreds of chemicals, all of which have limited ecotoxicological research. Due to the multitude of chemicals in need of research, Ithaca College in conjunction with Cornell University and the Ithaca Area Waste Water Treatment Facility are interested in contextualizing both the human and environmental risks associated with emerging pollutants. For example, by determining fish behavioral changes upon xenobiotic exposure, the potential disruption of trophic dynamics and subsequent ecosystem harm can be elucidated. This knowledge will be an important factor in establishing pollution mitigation methods and assessing the ultimate health and stability of the Cayuga Lake ecosystem, as well as other systems in New York.

We investigated the concentrations of over 200 chemicals in the Ithaca water system, including many emerging pollutants of concern. 24-hr composite samples were collected 4 times from 5 different locations (raw drinking water, treated drinking water, wastewater influent, wastewater effluent, and Cayuga Lake). We detected many compounds at all points in the water system in varying concentrations. Pharmaceutical and personal care compounds detected most frequently and in the highest concentrations include caffeine, nicotine, metformin, atrazine, and carbamazepine. Microplastics were also detected in lake samples. Based on the influent data, there was no clear difference in concentrations when college students were in town. Ecological investigations suggest that caffeine can alter fish swimming behavior, but only at higher concentrations than those observed in Cayuga Lake. Pilot studies also suggest that small microplastics (5 µm diameter) may cause increased mortality in Daphnia magna.

Greener Homes for a Cleaner Lake -Learn about the ingredients in everyday products that can affect your health and the environment. Resources by Rochester Inst. of Technology

Ithaca Voice Article, published Feb. 3, 2016 as part of the Signs of Sustainability series 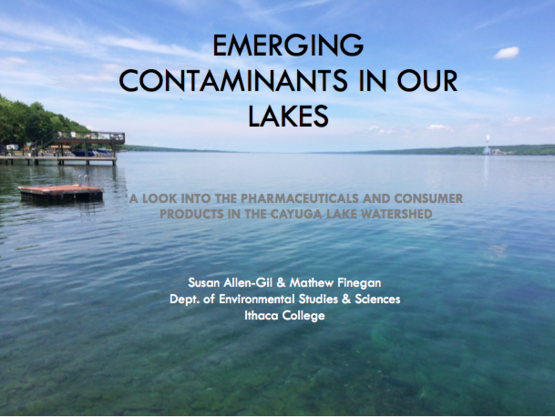 Click the image above to view a PDF presentation on Emerging Contaminants. 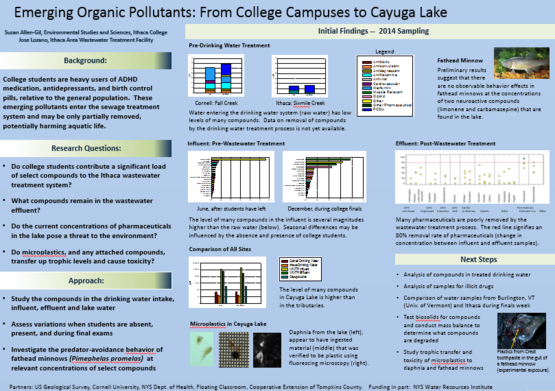