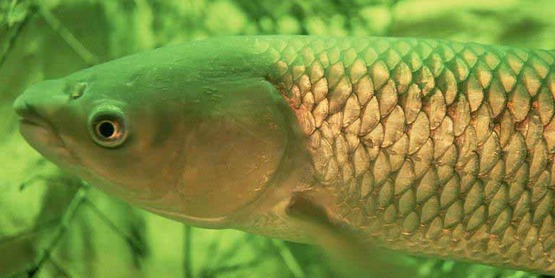 Grass Carp is a non-native fish that consumes aquatic plants.

Research has been done to find a suitable biocontrol for hydrilla. The feasibility of specific biocontrols -- including grass carp, insects, fungi, and pathogens -- has been and continues to be investigated. If you would like to read more about domestic/foreign biocontrols, scroll down to "Domestic Surveys and Natural Enemies Found."

Grass Carp, also called triploid carp or white amur (Ctenopharyngodon idella), is a non-native fish that voraciously consumes aquatic plants and can increase in weight by up to six pounds per year. They can be a good option for small lakes and ponds with no permanent outflow.

They do not work as a spot treatment. The fish will not stay where they are stocked in a large lake and there is no way to contain them in a particular area. Grass carp are typically stocked at 10 fish per acre in order to be effective.. Stocking rates this high could result in hundreds of thousands of fish per body of water and  would likely harm the existing fish and aquatic ecology.

Permits to buy and stock these fish are only given where migration out of a pond can be prevented. If these fish escape from a pond, they can cause extensive damage since they often favor native plants over exotics. If native plants are removed then populations of unpalatable species such as Eurasian watermilfoil can explode.

Adapted from Aquatic Weeds: Nuisance and Necessity by the Cayuga Lake Watershed Network and Diet for a Small Lake by NYS Federation of Lake Associations. A hard copy of this book can be purchased through NYSFOLA.

The development and use of insects as effective biological controls is still in its Infancy, in general and specifically for hydrilla. There are no known native insects that are significant pests for hydrilla. Efforts to find a non-native insect that is safe to use as a control are not yet promising. Insects can be picky eaters.

The work plan for an EPA project in Osceloa County, FL states, "The search for biocontrol insects for hydrilla has concentrated on seeking herbivores of hydrilla in East and Southeast Asia and Australia. Several insects have been found that feed only on hydrilla and have been introduced into the US. These insects have not however been predictable and have not significantly reduced the need for hydrilla management by other means."

The PA Dept. of Conservation and Natural Resources cites on their website, "Since 1981, the U. S. Department of Agriculture, U. S. Army Corps of Engineers and the University of Florida-IFAS have conducted worldwide surveys for other biological control agents. Over forty insect species have been identified as feeding on hydrilla and are currently being evaluated. The larvae of a weevil (Bagous affinis) discovered in India and Pakistan feeds on the subterranean tubers of hydrilla. This insect is only effective in areas of intermittent wet and dry periods or where periodic drawdowns are possible. It has not become established. A leaf-mining fly (Hydrellia pakistanae) has been released in Florida but it has had no impact. Hydrellia balciunasi was released in 1989 but had limited success due to variation in hydrilla populations and parasitism by native wasps among other factors. The accidental release of an aquatic moth (Parapoynx diminutalis) was shown to defoliate plants but leave viable stems. " (Descriptions and images.) Read a fuller report, The Herbivorous Insect Fauna of a Submersed Weed, Hydrilla verticillata (Alismatales: Hydrocharitaceae), in Proceedings of the X International Symposium on Biological Control of Weeds 307, 4-14 July 1999, Montana State University, Bozeman.

The project in Osceola County, FL also is looking at the use of plant diseases caused by bacteria, fungi and other micro-organisms. Such methods have been used with terrestrial weeds. According to the EPA, "One potential pathogen of hydrilla, Micoleptidiscus terrestris or Mt, was discovered on submersed weeds in the 1970's and has been evaluated periodically since that time. The problem with Mt has been the inability to develop cultures with high enough concentrations of Mt to be effective in the highly variable aquatic environment. Preliminary testing has also shown that some members of the Actinomycetes family has activity against hydrilla. None of these potential mycoherbicides have been developed in part due to the lack of commercial interest."