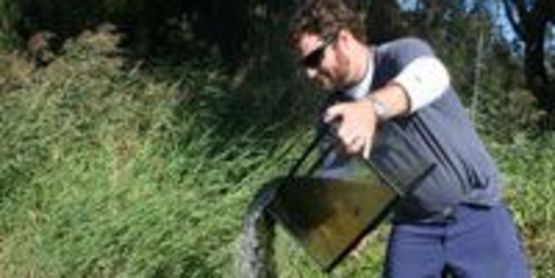 Dumping of aquariums could be one of the ways hydrilla got into the Cayuga Lake Watershed. 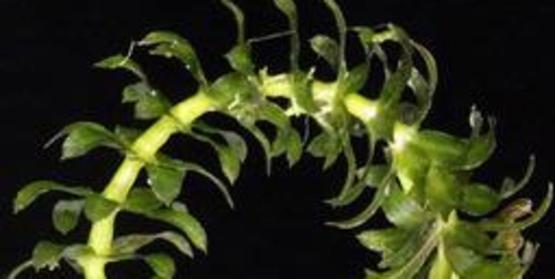 A close up of hydrilla.

Any activity that cuts or breaks apart weeds carries a great risk of spreading fragments to other portions of the lake (hydrilla specifically, but also for Eurasian watermilfoil and other plants that shoreline residents are likely to target). Hand removal can be used to manage nuisance weed growth near swimming areas, boat slips, or docks, but must be done VERY carefully to prevent fragmentation.

There are many different kinds of plants growing amidst the mass of "seaweed". If you are removing plants from selected areas, take a minute to inspect a few for comparison to the line drawing of hydrilla . If you see something similar, send us a photo using the report hydrilla suspects form.

Harvested plants should be thoroughly removed and disposed of on land away from the lake to prevent fragments or seeds from re-entering the lake. Large fish nets are useful for gathering floating fragments. The weeds are composed largely of water. They can be drained by piling them on pallets or on top of an old window screen placed on top of 2 x 2's that have been set up away from the shore.

Once drained, or dried, they can be added to a well-aerated compost bin (such as one made of welded wire) or windrow where they will decompose rapidly. To prevent the weeds becoming a slimy mess, layer the weeds with dry, brown material such as leaves or straw. A good rule of thumb is to alternate 2" of weeds (drained or partially dried) with 4-6" of leaves or straw.

Large quantities of weeds removed in a short time and dumped in a pile or in an enclosed compost container, without the addition of brown material, may stink as they dry and start to decompose. In rural areas farmers may be willing to take water weeds as compost as long as they don't have to do the transporting.

If you are a member or neighbor of a marina, encourage them to build a simple plant disposal station.

Adapted from Aquatic Weeds: Nuisance and Necessity  by the Cayuga Lake Watershed Network and Diet for a Small Lake by NYS Federation of Lake Association.

How You Can Help