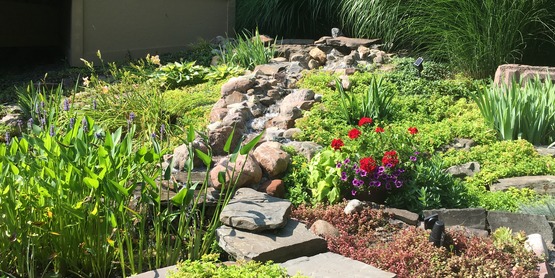 This hillside waterfall cascades at the Lyman Garden. 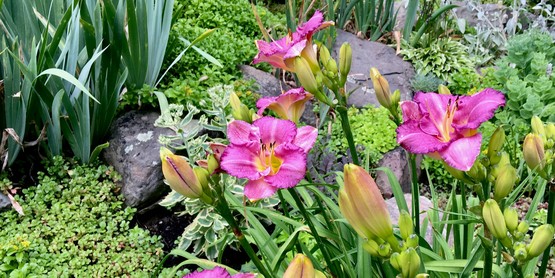 Daylilies abound in the Lyman Garden. 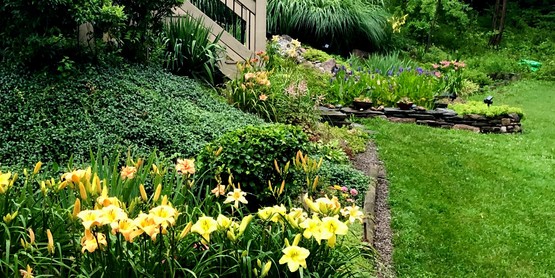 The hillside at Lyman Garden. 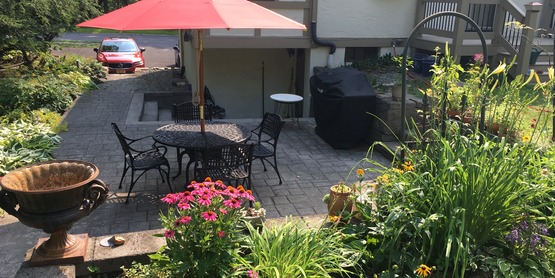 The hillside overlooks a paver patio.

Nestled in a hillside next to a ravine, this garden is landscaped in a naturalistic manner among large weathered limestone and sandstone rocks added to the heavily sloped terrain. It features forsythia borders, dramatic ornamental grasses and perennials (daylilies, yucca, Black Eyed Susans, irises) strategically placed around a waterfall cascading down the hill to a recirculating, reflecting pond.

Started in combination with the 2008 long-term renovation of a 1920's Tudor home, the gardens were expanded when a new hillside garage was added in 2011. Excavation revealed numerous large stones that became the foundation for the waterfall.

With an emphasis on sustainability and reduced maintenance, ground covers (periwinkle, pachysandra, lamb's ear, artemisia, and sedum) accent the gardens year-round. The ravine and creek run alongside the house, patio and garden, providing a dramatic backdrop to the garden with many mature evergreen and deciduous shade trees.

The sunny hillside gardens were designed to provide a continual flow of blooming perennials from April through October. In mid-July visitors will find a prolific display of over 25 varieties of daylilies throughout the hillside and border gardens. This lush habitat makes a home for frogs, bees, butterflies, hummingbirds, cardinals, robins and the occasional deer, offering a hidden sanctuary for wildlife in this.six acre city lot. This location is not handicapped accessible.

NOTE: This garden was featured on an Open Days Garden Tour and is not open to the public at other times.