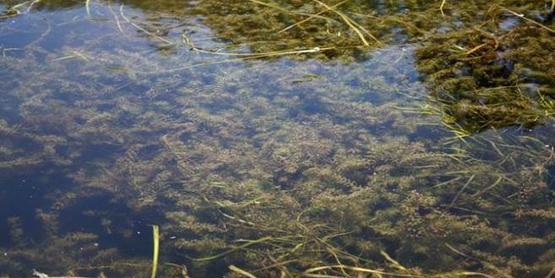 A newly found population of hydrilla, 2013. Photo by Bob Johnson.

On Thursday August 8, 2013, Racine-Johnson Aquatic Ecologists' survey crew found new areas of hydrilla growth in Fall Creek (Ithaca, NY) while conducting rake-toss surveys for hydrilla and other aquatic plants. Hydrilla was first found at the entrance to the Stewart Park Pond from Fall Creek (northeast side of Fall Creek), then within the Pond itself. A short time later, and over the next several days, hydrilla was also found growing in the backwater are adjacent to Newman Municipal Golf Course and scattered patches within Fall Creek. Hydrilla growth in the Fall Creek area was much less than what was observed in early August of 2011 in the Cayuga Inlet. No hydrilla was found in the area of the lake adjacent to Fall Creek. The discovery was made public on August 20, 2013 after the extent of the infestation could be assessed.

In both 2011 and 2012, floating fragments of hydrilla were observed in the inlet, meaning some fragments could have floated into the lake. A prevailing northwest wind on Cayuga Lake pushes the surface waters back into the inlet, toward Stewart Park and into Fall Creek. It is possible fragments may have been blown back into Fall Creek and become rooted. It is also possible that hydrilla fragments could have been transported to the Fall Creek area via watercraft (boats, canoes, kayaks, etc.) from an area of the Cayuga Inlet that was infested. The potential does exist for water fowl to carry fragments as well. The hydrilla in Fall Creek was likely there in 2012, but was not detected by our surveys due to growth being too low for detection. The Task Force believes that we have caught this growth very early, making eradication possible and confirming the importance of ongoing monitoring/sampling.

At the same time that the extent of hydrilla growth in Fall Creek was being delineated, the Hydrilla Task Force considered the possible treatment options. The Hydrilla Task Force applied to the NYS Dept. of Environmental Conservation for a pesticide permit to treat this new discovery with a contact herbicide to prevent any further growth of plants this fall. The herbicide Aquathol-K (active ingredient endothall), which has been used in 2011, 2012 and 2013 in Cayuga Inlet, is the standard and recommended treatment for a new infestation, though all possible responses were considered. Herbicide treatment in the Fall Creek did not affect ongoing herbicide treatment in Cayuga Inlet and did not necessitate closing the inlet. Signs were placed in the areas of new infestations to keep out boaters.

The purple outline on the endothall map shows the area for which the permit was requested. The herbicide was not applied to the entire area, but the extra area provides for some flexibility in case of unexpected hydrilla discoveries before the herbicide application. A one-day Endothall (trade name Aquathol K) treatment was applied to Fall Creek after the discovery of hydrilla by Racine-Johnson Aquatic Ecologists' crew team.

Fences were also installed to keep boats out of the Stewart Park Pond and the embayments along Fall Creek where hydrilla is established. Signs were made in order to alert boaters and anglers to voluntarily keep out of Fall Creek until the area was treated.

While the newly discovered hydrilla growth in Fall Creek was a setback, the Task Force believes that we have caught this growth very early, and both the Task Force and our national advisors stress that we must push forward with the eradication plan. The fact that this new area of infestation was discovered early supports the vital role that early detection and ongoing monitoring/sampling plays in our Project efforts.

Below is a map of the treated areas in Fall Creek during the 2013 hydrilla season. 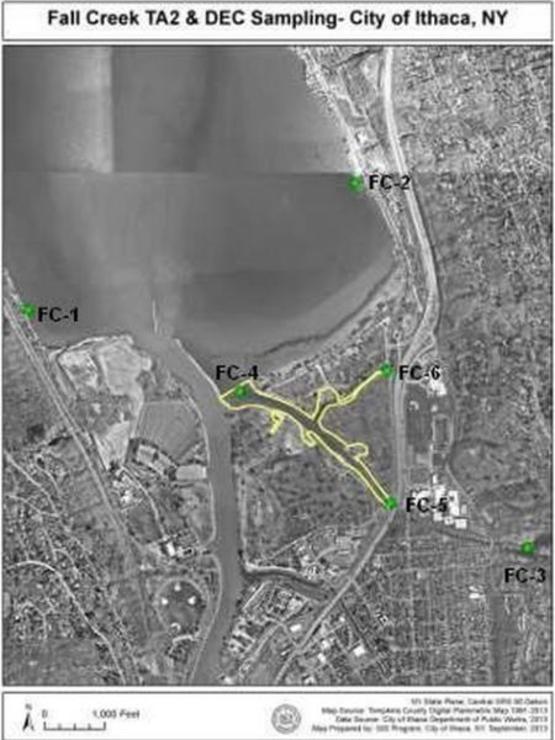