For the past two years, the Hydrilla Task Force of Cayuga Lake has been monitoring a line of small but thriving hydrilla plants anchored in shallow water just offshore of Ithaca’s Stewart Park  in Cayuga Lake. On August 13, the US Army Corps of Engineers hydrilla team for Cayuga Lake oversaw the targeted treatment of these plants using the aquatic herbicide Komeen Crystal.

Led by Regional Technical Specialist Michael Greer of the US Army Corps of Engineers Buffalo District, the team will work with Solitude Lake Management to apply the herbicide directly to the the plants, in a water depth of about three feet with a surface area of 4 acres.

At no time will the herbicide concentration exceed safe water use standards for humans, wildlife, or fish. The use of lake water as a source of drinking water is not recommended at any time. Residents should be aware that the application concentration of 1 part per million of copper is close to the drinking water action level of 1.3 parts per million. To ensure full public confidence, water quality will be tested regularly over a 72 hour period following application. Additional tests will be made at the Bolton Point Water Plant.

The Corps and Task Force hope that this single treatment will finish off this threat to the shallow waters at the south end of Cayuga Lake.

Uncontrolled, hydrilla could quickly spread to fill the south end with a thick mat of dense plant growth that would inhibit boating, paddling, fishing and native species.

According to Jon Negley, Tompkins County Soil and Water Conservation District, “Continued monitoring of any future plant growth will dictate any future control options pursued by the Task Force.”

For specific questions related to chemical application and monitoring contact:

Hydrilla is absent from Ithaca’s creeks and waterfront, thanks to  an effective
7-year treatment and management program

Every summer since 2012, June and July were the months when businesses and residences around the south end of Cayuga Lake received notices that chemical treatments were starting soon, to continue the long-term eradication of hydrilla from Cayuga Inlet, Stewart Park near the mouth of Fall Creek, and just offshore in Cayuga Lake’s southeastern corner. For six years, interns installed hundreds of stakes topped with yellow notices along the lake’s edge and waterways. Not so in 2018!

The invasive aquatic plant hydrilla ( Hydrilla verticillata) was first found by an eagle-eyed intern on the Floating Classroom (a program of Discover Cayuga Lake) in August 2011. A massive coordinated rapid response effort carried out by local and state agencies, researchers and community groups, revealed that 166 acres of Cayuga Inlet – Ithaca’s premiere waterway – was infested with hydrilla.

Seven years after that discovery, the news is good: there will be no chemical treatments for hydrilla in Cayuga Inlet or Fall Creek this summer, because no hydrilla has been found in either water body for over a year. Monitoring and testing will continue, to ensure that no hydrilla has returned.

Thanks go to the Hydrilla Task Force team that has overseen a careful, conservative treatment process each year; to the stalwart researchers who have been monitoring the creeks meticulously each year; and to the engaged public and Hydrilla Hunters who have their eyes peeled for its appearance from July to as late as November, when waterways cool down for the winter.

However, there is a recently-discovered patch of hydrilla in shallow waters off Stewart Park; and two plants have been found farther north offshore of the east and west shores, in deeper water. As of mid-July, the Stewart Park plants are beginning to show themselves at the surface. These will be monitored and treated.

Teamwork and communication will be key to the two groups’ interactions. The Hydrilla Task Force will do the mapping and monitoring. The USACE will treat, using chemicals if the Task Force finds it necessary. The Hydrilla Task Force remains responsible to manage hydrilla by hand removal or with barriers such as benthic mats (thick mats that keep out sunlight). Funding for treatment will be provided by the USACE.

Contact: Jenn Grillo Tufano with the Cayuga Lake Watershed Network if you:

Time to Toss that Rake! 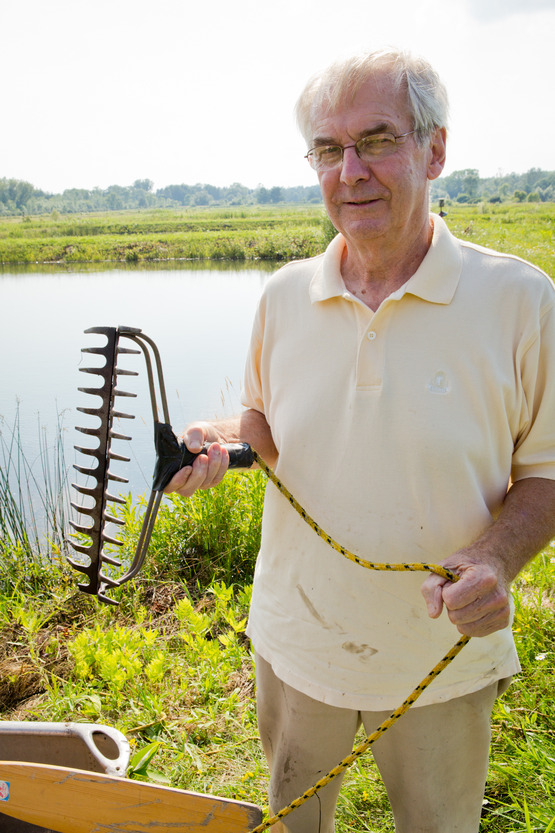 Hydrilla plants reached Cayuga Lake’s surface and are spreading out. This is THE time, from now to when the water gets cold (as late as November) to regularly check from a dock or boat to see if hydrilla has emerged. A lake rake is a handy tool for harvesting lake plants from dock or boat. If you find hydrilla, submit a report

Contact us for instructions on how to make a lake rake (need two rake heads and sturdy cord): Jenn Grillo Tufano - programs@cayugalake.org

OR attend a Lake Rake workshop:

To those who received lake rakes last summer - please get them out and start using them!! 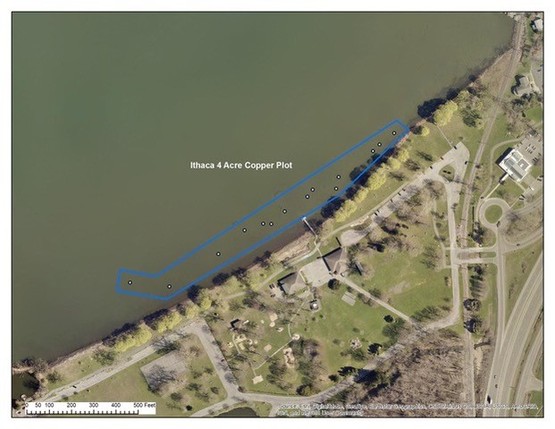 Several nearby patches of hydrilla off Stewart Park were treated with the copper-based herbicide Komeen Crystal. At no time will the herbicide concentration exceed safe water use standards for humans, wildlife, or fish.  Official use label. for Komeen Crystal.