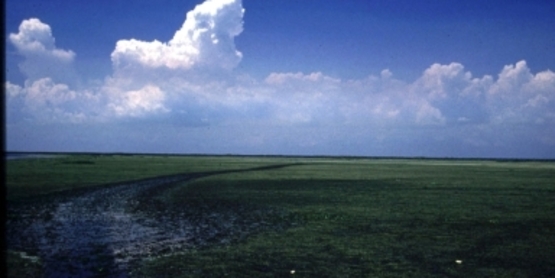 Hydrilla became established in Lake Moultrie in the 1980's and peaked in 1994.

Aquatic plants can foul boat propellors, tangle water skis, close swimming beaches, and degrade water quality, but this survey, conducted in 2003, suggests that anglers prefer higher levels of aquatic plant coverage. Anglers on Lakes Murray and Moultrie in South Carolina expressed preference for increased aquatic vegetation, and suggested that they would increase their angling effort and therefore economic activity in those areas if the vegetation increased.

Hydrilla became established in Lake Moultrie in the 1980's and coverage peaked in 1994. The lake was stocked with Triploid grass carp in 1989, which eliminated submersed aquatic vegetation by 1997. Hydrilla peaked in Lake Murray in 1996, and herbicide treatments and winter drawdowns began. Hydrilla coverage has been increasing in the lake since 1999, and aquatic plant control continues in priority areas such as along developed shorelines and near access points.

Anglers at both lakes were interviewed about their average number of annual fishing trips, how they thought increased or decreased plant coverage affected their fishing success, and how their use of the lakes would change if plant cover was to increase or decrease.

At both lakes, the majority of anglers answered that increased plant coverage helped their fishing success, and that they would increase their angling efforts if aquatic plant coverage increased.

This has signigicant economic implications. Average angler trip expenditures ranged from $14.60- $247.57, and increased plant coverage would increase angling effort by an estimated 11-14% and increase economic activity in related sectors (such as lodging) by 18-63%. It was observed that in these economic regions, boaters spend more money than non-boaters, and anglers from outside the region spent more than residents.

The article discusses the importance of remembering that anglers make up only one group of people using the lakes and contributing to the economy surrounding the lakes. It suggests that water skiers, pleasure boaters, and swimmers may have different opinions on optimal aquatic plant coverage levels.