Blue-green algae can grow densely on hydrilla in the southeast US.

Discoveries in Southern United States have linked hydrilla and a deadly toxin to the death of waterfowl. So far, Hydrilla does not appear to be a significant factor in the harmful algal blooms in NYS.

Avian Vascular Myelinopathy (AVM) is a disease produced by toxin that comes from cyanobacteria, better known as blue-green algae, that attacks the nervous system of some birds, especially bald eagles and American coots. AVM has been responsible for the death of over 100 bald eagles and thousands of coots in Southern United States. According to the U.S.Geological Survey National Wildlife Health Center, AVM has also been confirmed as the cause of death of mallards, buffleheads, ring-necked ducks, Canada geese, killdeer, and a great horned owl [1].

Researchers have found that blue-green algae grows easily on the leaf and stem surface of aquatic plants found in southern reservoirs where many bird deaths have occurred due to the AVM disease. Between 20% and 90% of the leaf and stem surfaces of aquatic plants (primarily hydrilla) in these reservoirs were covered with blue-green algae. Scientists have discovered that blue-green algae grows densely on hydrilla, and these aggressive invaders are the dominant vegetation at all lakes with a high record of occurrences of the AVM disease. Blue-green algae becomes deadly when eaten by coots, mallards, geese, and other plant-eating waterbirds. A toxin within the blue-green algae causes these sickness and death of these waterbirds. Eagles are also affected as they prey on sick and deceased waterbirds containing the toxin.[2]

Dr. Susan Wilde, a researcher with the Warnell School of Forestry and Natural Resources at the University of Georgia, has been exploring the connection for several years. According to Dr. Wilde, AVM "could spread as invasive plants spread ... and adds that 'the cycle could be broken by getting rid of invasive species plants where the disease is prevalent".[3] Researchers have solid evidence that eliminating invasive plants (such as hydrilla) can help in reducing AVM-related deaths. Since hydrilla was nearly eliminated from Lake Murray, South Carolina, AVM deaths have disappeared.

Risk to people and pets

According to the Indiana Department of Health, exposure to blue-green algae during recreational activities such as swimming, wading, and water-skiing may lead to rashes, skin, eye irritation, and other uncomfortable effects such as nausea, stomach aches, and tingling in fingers and toes. Livestock, pets and wild animals can be poisoned. Small animals can very quickly and easily eat enough of the poisonous plant to cause serious harm. Dogs are particularly susceptible to blue-green algae poisoning because the scum can attach to their coats and be swallowed during self-cleaning. Clinical signs of blue green algae poisoning in animals include vomiting, diarrhea, decreased appetite, weakness, seizures, and sudden death. [4] 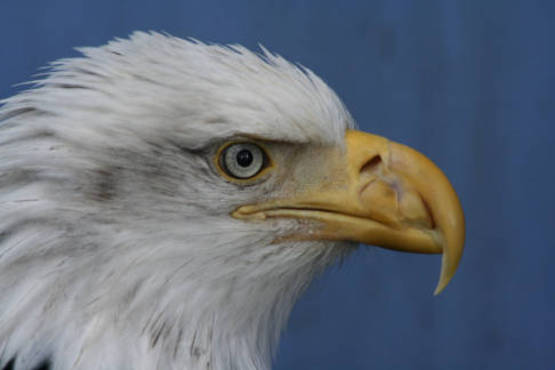 National Geographic article on endangered bird explains serious link between the death of raptors and an algae that grows on hydrilla in the southeastern US. “…the disease’s (AVM) cause,a toxic species of blue-green algae that grows on aquatic plants. It has a particular fondness for hydrilla…When waterfowl such as coots and ducks eat algae-covered hydrilla, they can be infected with the (lethal) brain disease...when they (eagles and other raptors)...eat infected waterbirds, the predators develop the disease too.” (May 2016)

While it is a clear concern in the southeastern, we don't know of any similar deaths in the Northeast.

University of Georgia founds toxic cyanobacteria, blue-green algae, was killing American bald eagles in the Southeast (February 2015). This builds on research by the U.S. Army Corps of Engineers (2012).