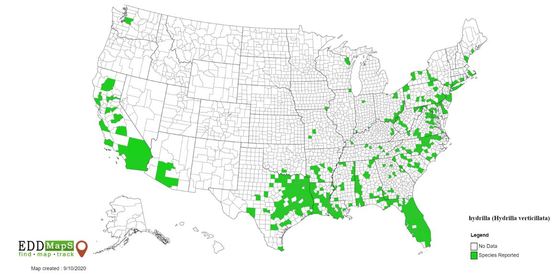 Where Else Is Hydrilla Found?

The Great Lakes Hydrilla Collaborative is now tracking where hydrilla.  See their

A new infestation of hydrilla was discovered in September 2016 in Aurora, NY, adjacent to Wells College shoreline. This new discovery was made by the volunteers aboard the Cayuga Lake Floating Classroom. FL-PRISM, Cayuga Lake Watershed Network, Cayuga County, Hydrilla Task Force, and other interested parties coordinated in October 2016 to conduct an extensive survey and delineation of new infestation. Stakeholders will collaborate to develop a management strategy for the 2017 season.

A new infestation of hydrilla was discovered in fall 2015 in Tinker Nature Park, located near Rochester, NY (Monroe County). This discovery was made by Hilary Mosher, Coordinator for the Finger Lakes Partnership for Regional Invasive Species Management (PRISM). Tinker Pond is a small, isolated pond with no inlets or outlets. Response efforts involve stocking of triploid grass carp (2015) and installation of benthic barriers (2016).

A new infestation has been found in Brooklyn's Prospect Park Lake in June 2014. Since the lake is 20 miles from the nearest infestation, water fowl seem to be the likely culprits of transporting hydrilla. The Creamery Pond treatment described below has received another grass carp stocking.

A new infestation of hydrilla was discovered in October 2013 in the Croton River, in Westchester County, NY (2). The hydrilla was already well-established, and both floating and rooted hydrilla were present. NYS DEC has already begun an interagency response, and will determine a response plan that will fully survey the infestation, consider options for treatment, and educate the public. By November 2013, the Croton River infestation had reached the mouth of the Hudson River.

Cayuga Inlet (187) was the first finding of hydrilla in upstate New York (Aug. 2011). In September 2012:  Hydrilla was found near the Erie Canal in North Tonawanda (151). More detailed map of the infested area of Tonawanda Creek. Small isolated ponds in Broome County (3)

Before 2011, hydrilla had infested 8 isolated lakes downstate. For a variety of reasons, the DEC's response in NYS has largely been containment, rather than trying to eradicate the plant. The exception is Creamery Pond in Orange County (2), which was treated with fluridone/copper followed a couple of years later by stocking of grass carp.

In most of the untreated lakes, it is hard to know much about how it spread, since there is little or no information about these small bodies of water before the infestation was discovered. According to Kishbaugh, "The best information is for Lake Ronkonkoma, the other 'significant' waterbody with hydrilla. We have decent pre-infestation data, and a pretty good idea that the 2009 hydrilla finding was probably within a year of infestation. Prior to hydrilla, the lake was essentially devoid of vegetation.

Invasive Hydrilla in Croton Bay and the Hudson River

The New York State Department of Environmental Conservation (DEC) Hudson River Estuary Program and the Office of Invasive Species Coordination (OISC), in cooperation with the New England Interstate Water Pollution Control Commission (NEIWPCC), announced a $50,000 contract award to Allied Biological to conduct a survey of the aquatic macrophyte Hydrilla (Hydrilla verticillata), also known as water thyme, in the tidal Hudson River estuary. The contract is issued by NEIWPCC and funded under the state Environmental Protection Fund...

...Survey methods will include standardized rake toss protocols and assessment of plant tubers (root-like structures) in the soil. The purpose of this project is to identify the extent of Hydrilla at selected locations in the Hudson River both north and south of Croton Bay, and gather information about plant conditions that may be used for future management strategies. The final project report will include assessment of Hydrilla distribution in the Hudson River estuary and results of the plant tuber analysis at select locations near Croton Bay. The survey complements research conducted within Croton River and Bay in 2014.

Funding for the survey is provided through the New England Interstate Water Pollution Control Commission and is administered under DEC's Hudson River Estuary Program.

HUC stands for Hydrologic Unit Codes. Hydrologic unit codes are a way of identifying all of the drainage basins (watersheds) in the United States in a nested arrangment from coarsest (smaller number, such as HUC 2) finest (HUC 8). Mapping in this manner indicates recorded presence of a hydrilla from at least one location within a designated drainage.

1976 was the year hydrilla was first discovered in a man-made lake in California. In 1985, hydrilla had spread to another location and the Governor declared a "State of Emergency" to begin process of eradication. Of the 29 separate bodies of water found infested with hydrilla, there are only 9 remaining sites where hydrilla has not been eradicated. More info here.

Hydrilla was first found in Florida in 1960 in the Snapper Creek Canal in South Miami, but it would be five more years until it was identified. More info here.

Hydrilla was identified in the Bruneau River near Bruneau, ID in December 2007. Surveys found an infestation that extended twelve miles through the lower Bruneau River system. Repeated surveys of waters downstream of this area has found no hydrilla in CJ Strike reservoir or downstream in the Snake River. Read full article .

Hydrilla was discovered in Lake Manitou during a routine aquatic plant survey conducted by the Division of Fish and Wildlife in August 2006. At the time of discovery, hydrilla had never been confirmed in a body of water in the Midwest. When found, the plant was scattered throughout a large portion of the northern basin of Lake Manitou indicating it had probably been present for a few years. Read full article.

As of December 2005, biologists have found no evidence of hydrilla in Michigan's shallow Great Lakes bays, 11,000 inland lakes or thousands of miles of streams. However, the level of concern for ecological damage and economic harm to Michigan's water resources has increased due to the fact that hydrilla is now known to exist in two Great Lakes states, Pennsylvania and New York. Read full article.

In 1994 hydrilla was found in Pipe and Lucerne Lake. Immediate action was taken but it was not until 2003 that their efforts appearead fruitful and eradication feasible. Hydrilla hasn't been found in Lucerne Lake since 2004 and since 2006 in Pipe Lake. Read full article.