There are 78 container planters on The Commons. 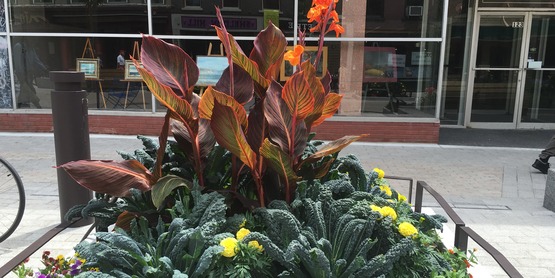 In-ground annual plantings on the Commons. 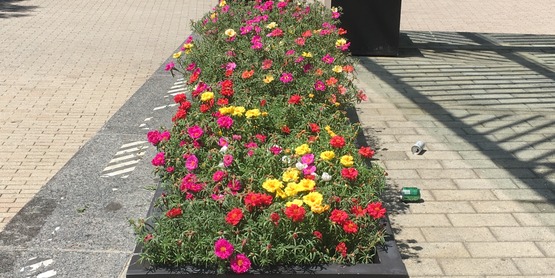 Portulaca planted in the containers at the Bernie Milton Pavilion

Pansies and allium on the Commons

Planting pansies on the Commons 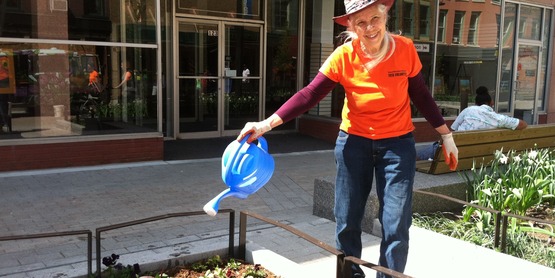 Volunteers plant and water the annual inground plantings on the Commons. 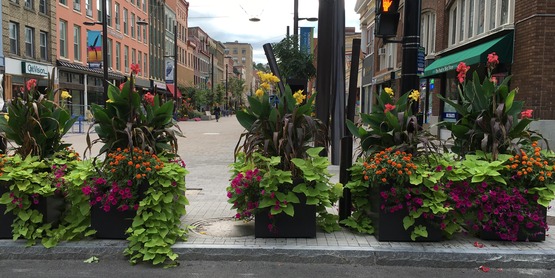 The entrance to the Commons from Cayuga St 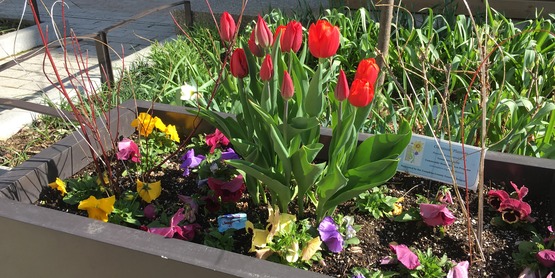 Potted bulbs and pansies in the spring

The Commons is a pedestrian mall in the center of Downtown Ithaca. It runs down State St (Martin Luther King Blvd.) from Aurora St. on the east side to Cayuga St on the west side. It forms a T at Bank Alley crossing to Seneca St. Originally developed in the 1970s, The Commons underwent a complete demolition and renovation starting in the spring of 2013 and completed in stages during 2015. Plantings on the Commons include long narrow perennial beds, individual tree plots, eight annual beds and 78 4’ x 2’ annual container planters made out of a composite material and standing 3’ high.

In fall of 2017, the Commons added six new 5' long planters around the fountain in Bank Alley.  These new planters are only a foot high and do not block the view of the fountain. GreenTree Garden Supply donated potting soil and the planters were planted with mums, ornamental kale and pansies for the fall.  Additional wooden planters were added in the spring of 2018 to fully surround the fountain--which has undergone major repair.

The Community Beautification Program is in charge of the annual beds and containers on the Commons, with support from Downtown Ithaca Alliance for watering.

The kale is edible and is harvested throughout the season and donated to Loaves & Fishes, serving free meals five days a week at nearby St. John's Episcopal Church.

The container planters are planted for three season interest: Pansies and potted bulbs in the spring, mixed summer annuals, and winter greens and ornamental branches for the winter months.